The Govt Of India, once again trying to deprive Safdarjung Hospital and its doctors and patients of the infrastructure and health care facility it desperately needs. 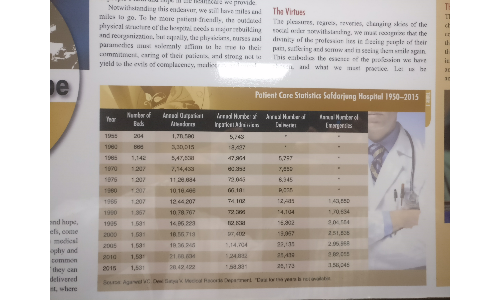 Safdarjung Hospital, opened in 1942 has over the years become one of the largest Government hospitals in India. Initially started as a 200 bedded hospital, Safdarjung Hospital had grown to become almost a 1600 bedded multi-specialty hospital in the first 50 years since its inception catering to the poor and needy not only from Delhi but also covering a vast majority of the population of North India.

Since the last 20 years, the patient load has tremendously increased with recent 2017 statistics showing an annual OPD attendance of almost 35 lakhs and an admission rate of almost 2 lakhs/year, but the infrastructure has remained the same. Owing to the this huge amount of patient load and healthcare it caters, the Government Of India in 2011 decided to gift Safdarjung Hospital two new blocks at the cost of 1200 crore each, a 600 bedded Emergency Block and an 800 bedded.

Super-specialty block under the "Safdarjung Hospital Redevelopment Plan Phase 1", after almost 20 years of negligence and under-development.

Finally in 2018, with the efforts of local administration of Safdarjung hospital, the New Emergency block was made functional. As per recent news reports, the Parliamentary Committee is taking advantage of this and considering handing over the present SSB to AIIMS and converting it into a cardiac rehabilitation centre as soon as possible.

I would like to state the following points on this:

1. The Super-specialty block was constructed as part of "Safdarjung Hospital RedevelopmentPlan Phase 1" in the area allotted to Safdarjung Hospital with the huge efforts and strict monitoring of the administration and faculty of SJH over the past 4 years.

2. Whereas AIIMS was primarily started as a research and academic institute catering to a lot of VIPs and upper middle class population, Safdarjung Hospital has been over the years and still is catering to mainly the lower class, the poor and the needy from Delhi and all states nearby. With the recent increase in waiting times and patient load, it is high time that the infrastructure of SJH be improved so that the general masses can be benefited.

3. AIIMS has a one-bed one rule policy which gives it the power to refer patients, whereas Safdarjung Hospital has a strict no-referral and no-refusal policy. So it never refuses any patient and has to admit all patients who require admission, sometimes 2-3 on the same bed and hence proving the serious need for infrastructure development.

4. AIIMS plans to start an 800 bedded cardiac rehabilitation centre in the building, whereas Safdarjung Hospital plans to have 9 super-specialties covered in the same building and hence catering to a larger group of the population.

The Parliamentary Committee has cited lack of recruitment of doctors and staff as the reason forhanding over the block to AIIMS, but who has to provide the funds for recruitment? Isn't it the job of the Govt. of India to provide funds for the same?

The Convener of the Resident Doctors Association of Safdarjung Hospital, Dr Balu Ravi along with his colleagues has been making several attempts to contact the ministry regarding the same issue but haven't got any response from them. "Any such move by the ministry to deprive Safdarjung hospital and its innumerable patients of this super specialty block will be strongly condemned ", they said.

There are plenty of doctors and staff waiting to work in such a prestigious institute that Safdarjung is and once the funds are sanctioned there should be no dearth of staff and the block will be up and running soon.

But instead of that, to satisfy the vested interests of a few individuals, the Government Of India and Ministry Of Health and Family Welfare are once again trying to deprive Safdarjung Hospital and its doctors and patients of the infrastructure and health care facility it desperately needs.