Artifacts dug out reportedly date back to Mughal rule but due to lack of awareness, they are often lost, destroyed and even drowned by the unsuspecting villagers 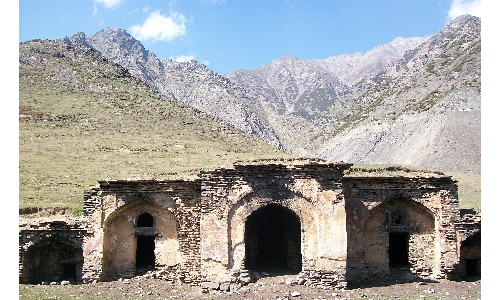 Different places around Heerpora village are reminiscent of Mughal-era inns constructed for emperors who had stayed there around 350 years back.

Heerpora villagers of Shopian district are quite used to finding engraved stones and earthen-ware utensils during routine work on their farm lands. More concerned about growing copious amounts of in-demand red potatoes, these farmers don't care about rare sculptures and obscured Mughal legacy buried under their feet.

Ahsan Iqbal, a local, is keen on preserving hidden treasures of olden times, and abhors the way other villagers often destroy such objects excavated from their fields of other areas. "Quite often, people digging into an area of land for agricultural purposes will find carved stones, pottery utensils of cylindrical shape, unique stone pipes and scaled stones with holes engraved and statues of unknown goddesses but they have been ruined," Iqbal said.

Iqbal has compiled anecdotes handed down by elders about establishments of Heerpora village – seemingly luxurious public houses dug-up by their forefathers at different places around the village are reminiscent of Mughal-era inns constructed for emperors who had stayed there around 350 years back. This is corroborated by noted historian Muhammad Yousuf Taing who says that Heerpora during Mughal rule was the gateway to Kashmir and emperors had constructed inns for their stay.

While refusing to share more information, Taing claims that nothing has been written so far and he will soon come up with a detailed compilation of Mughal art and infrastructure buried in Heerpora village.

Back in Heerpora village, residents say that they have heard from elders that Mughal rulers actually modified 'Nu-Ne-Wath' (salt road) not constructed as many people in Kashmir believe and then later named the road as Mughal road to add credit to the regime.

This village with a population of 3311 sits right is spread over 4.4 sqkm and constitutes of four other villages - Padpawan, Borihalan, Chotipora and Krechapathri.

"I have seen villagers while farming in their fields dig up stone drainage system and house basements made of carved stones. I had heard from elders about 12 structures including Mughal inns and a qila. But I don't know how many of them still exist," says Haji.

One of the Mughal inns still worth preserving in Heerpora's main market was allegedly disfigured by security forces.

Heerpora is surrounded by several large lakes, and hence often floods during monsoon. Lack of knowledge among people, local businessman Muzafar Ahmad says resulted in drowning of countless goddess statues of unknown era. "On the banks of river Rambia-Aara, few goddess-like statues found by elders were drowned during floods," he claims. However, he also claims the water to have divine and medicinal value.

Information of genealogical roots - from Mirpur of present Pakistan and Bimber of Rajouri, Jammu division – is passed down generations, hence it is a bit sketchy and unreliable. "Not many know about their roots but some claim that people of Heerpora are not permanent residents and have assimilated many traditions from diverse cultures in history," Zahoor Ahmad says.

A custom to marry their sons and daughters in Rajouri and adjacent areas was only encouraged by Mughal road construction as the tradition people claim has its age old roots in them.

Following the development regarding construction of tunnel from Zaznar to Chatapani areas along Mughal road to connect Kashmir with the rest of the world, people of Heerpora are happy to get the status of 'gateway to Kashmir' back again.