McDonald's to switch to paper straws to reduce environmental degradation

McDonald's to switch to paper straws in its UK and Ireland branches in response to the environmental concern. 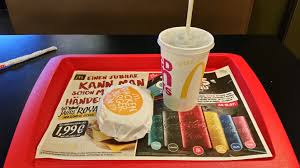 McDonald's on Friday said that it will drop drinking plastic straws and will switch to paper straws in all of its branches in the United Kingdom and Ireland. This change will be implemented in September. The company will also seek an alternative to plastic straws in some of its US restaurants.

According to hindustantimes, McDonald's Corp. declined to say what type of straw it would test in the US, only saying that it would be a "sustainable solution." It has more than 14,000 US restaurants, compared to about 1,360 in the UK and Ireland.

This development came due to increasing pressure from customers and environmental activists. They alleged that the straws can end up in the ocean and harm marine life thus, degrading the environment.

According to sky news reports, the announcement follows news that the government is planning to ban the sale of plastic straws, drinks stirrers and cotton buds from sale in England.

It follows a successful trial at a handful of venues from April. It was reported that customers reacted positively to the change and were enthusiastic about protecting the environment.

Burger King, Wagamama and JD Wetherspoon have all ditched plastic straws in the last year.

Paul Pomroy, chief executive of McDonald's the UK and Ireland, said: "Reflecting the broader public debate, our customers told us they wanted to see a move on straws but to do so without compromising their overall experience when visiting our restaurants.

"The government's ambitious plans, combined with strong customer opinion, has helped to accelerate the move away from plastic and I'm proud that we've been able to play our part in helping to achieve this societal change."

The replacement straws will use paper from sustainable sources, the company said.