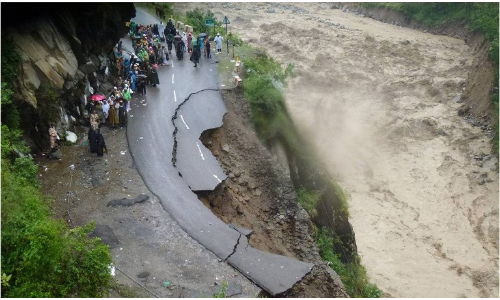 The counsel for the petitioner Dr Kartikey Hari Gupta said that the primary cause for filing the PIL was the 2013 devastation that caused havoc in Uttarakhand. Pic for representational purpose only.

The Uttarakhand High Court halted ongoing construction of hydro plants and asked the District Magistrates to come up with demarcated areas for muck disposal on an urgent basis.

NGO Himadri Jan Kalyan Sansthan, submitted a petition claiming that the state had "failed to take measures to check the haphazard muck/excavated material disposal in the river Mandakini and Alaknanda thereby changing the natural course of the river and causing unnatural rise in the riverbed".

A division bench of the High Court headed by Justice Rajeev Sharma said, "The District Magistrates throughout the State of Uttarakhand are directed to ensure that no muck, debris or excavated material is dumped directly into the rivers by any hydro-electric company, developers and the authorities responsible for construction of roads."

Muck disposal sites must be located on an urgent basis, said the High Court.

"The Ministry of Environment, Forest and Climate Change, Govt. of India, Uttarakhand Environment Protection & Pollution Control Board and Revenue Agencies, are directed to identify suitable muck disposal sites 500 meters away from the river banks for disposal of muck and excavated material within three weeks from today on utmost urgent basis. The muck shall be deposited/stacked only on the identified muck sites by putting up sign boards. Till the disposal sites are identified and become operational, till then, all construction activities/widening of roads on the river banks in the state shall remain stayed," read the HC verdict.

The counsel for the petitioner Dr Kartikey Hari Gupta told News18 that the primary cause for filing the PIL arose after the 2013 devastation that caused havoc in Uttarakhand.