Erin Klassen
American Samoa is assessing the damage from Cyclone Gita, a Category 2 that came through over the weekend.

"There's no power and electricity in the whole country except for essential areas, so from the Red Cross we know that there will be a lot of problems for water and sanitation." (newshub.co.nz) 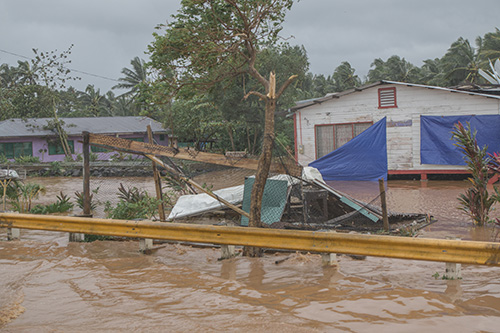 The U.S. Department of Homeland Security's Federal Emergency Management Agency (FEMA) announced yesterday that federal emergency aid has been made available to the territory of American Samoa to supplement territory and local response efforts due to the emergency conditions in the area affected by Tropical Storm Gita. (fema.gov)

However, much of the public is not made aware of events like these as anything climate change related is often under reported in mainstream media.

Seventy-nine percent of climate change coverage on the major US corporate broadcast TV networks last year focused on statements or actions by the Trump administration, with heavy attention given to the president's decision to withdraw from the Paris agreement and to whether he accepts that human-caused climate change is a scientific reality. But the networks undercovered or ignored the ways that climate change had real-life impacts on people, the economy, national security, and the year's extreme weather events -- a major oversight in a year when weather disasters killed hundreds of Americans, displaced hundreds of thousands more, and cost the economy in excess of $300 billion. (media matters.org)

Recently, the Prime Minister of Samoa, The Hon. Tuilaepa Sailele Malielegaoi, was the first to sign the Marine Arctic Peace Sanctuary Treaty (MAPS) noting that his country is on the frontlines of disasters from destabilizing climatic conditions and rising sea levels, and protecting the arctic is pivotal to addressing issues related to climate change. (democracynewslive.com)