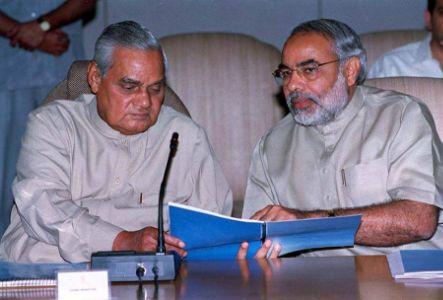 Much is being spoken about the former Prime Minister Atal Behari Vajpayee, and rightly so. Rest in Peace. He lives through his work and leadership. And he famously said, "Mout ki umra kya hai? Do pal bhi nahi. Zindagi ek silsila hai."

But beyond this moment, it is also the time to remind us of one vital aspect of Indian polity today. The Right is at the centre-stage with Prime Minister Narendra Modi in power. It had its glory, albeit a benevolent one, with Vajpayee in power too. How do these two faces of the Indian Right compare between themselves?

First and foremost, Vajpayee had been a gentleman and a poet politician. As several channels today are showing clips of his speeches in the Parliament, both as the Prime Minister and as the Leader of the Opposition, we can see that whenever he stood to speak in the Parliament, people listened to him with rapt attention, enjoying the way he would blend poetry into politics seamlessly. Vajpayee respected the right to dissent or disagree, as a part of polemics, and engaged with the dissenter, within and beyond his own party, which is so important in current times.

Modi, in contrast, is known to mock at the accent of opponents, make crude gestures doing a mimicry of those in his opposition, resort to whataboutry and a blend of myths, facts and historical lies to convey his message, albeit with a gift of the gab. He is known to be a communally dividing face, from Gujarat to Delhi, who can accept headgears of any community but not a Muslim skull cap, can visit any mandir or gurdwara, and even a mosque in the Middle East, but not a church or mosque in India.

Second, that Vajpayee is a loved leader is proven by the fact that between 1957 to 2009, he was continuously a Parliamentarian, being elected ten times to the Lok Sabha. He believed in the seriousness of a lawmaker's job, proposed training for newbie legislators, and proposed National Agenda of Governance including role of Parliamentarians. The purposefulness of the Parliament was writ large in his work while in the Opposition or in power. And, while in power, unlike several other PMs before and after him, he was indeed the 'first among equals' in the cabinet, in the true spirit of Parliamentary democracy.

Modi is a first time Parliamentarian, started by offering pranams at the doors of the Lok Sabha, and went on to avoid attending sessions, answering questions on many occasions, passing important legislations in a jiffy, and short circuiting sessions and often ruling through ordinances. Like Indira Gandhi, in Modi era, only the Prime Minister matters, and PMO is the most powerful office. For example, at times, even the media wondered who is the real foreign affairs minister of India: Modi or Sushma Swaraj.

Third, Vajpayee surely was a value oriented leader. He lost his first government of 13 days in 1996 for lack of numbers in LS, and also his next government in 13 months, in 1998, again for lack of support of just one more MP. But he did not compromise on ethics. He was optimist that if your politics is right, people will back you up. His writing, 'Andhiara fir hatega, ek naya savera ayega' and poem, 'Geet Naya Gata Hoon', bear testimony to his spirit against adversity and acceptance of the same to win another day. He is graceful in defeat. People rewarded him with full majority in 1999 and he governed a full term as the first non-Congress PM to have done so.

Contrast this with the times today. Governments in Goa, Meghalaya, Arunachal, Nagaland and Karnataka were made through jod-tod politics, which did not succeed in Karnataka. A ruling coalition in Bihar was broken. A government formed in Delhi with a historic mandate has not been allowed to function to fulfil its electoral promises and provide good governance. The CBI is allegedly being used to keep political opponents under pressures. Whether people reward Modi for his style of rule shall be seen in 2019.

Fourth, Vajpayee had been thoroughly a nationalist, but one who advocated and practiced positive nationalism. He proudly took Hindi to the UN first time, and spoke in it in the General Assembly. He represented the best of Indian ethos and culture.

In contrast, today we are in a situation of acute social disharmony, mistrust and mutual hatred among communities: whether between Hindus and Muslims, or between upper and lower castes. Today, the discourse is less on positive nationalism or patriotism, and more on labelling people who question the government on politics, art, culture, media or on campuses as anti-nationals. An aggressive negative brand of Indian nationalism has overtaken the subtle benign 'Vasudhaiva Kutumbakam' perspective of the world is my family.

Fifth, this nationalism of Vajpayee made him perhaps the only Right Wing leader of India ever who represented the Ganga-Jamuni culture of India to the hilt, and is loved by Hindus and Muslims alike in Lucknow. He was elected with record margin as MP from Lucknow which has a large percentage of Muslim votes. Vajpayee bitterly criticised the failure of Raj Dharma during Gujarat riots, which was an indictment of the government of the day in the state. His philosophy of being a Hindu, so aptly described in his poem, 'Hindu tan man, Hindu jeevan', stands in sharp contrast to the aggressive no-holds barred version of Hindutva today.

In contrast to his 'Hindu Jeevan' which is all embracing, stands the exclusivist aggressive brand of Hindutva, which has been brought in today in the Modi era, debates leading to lynching and violence on concocted grounds of love jehad, goraksha, ghar wapsi, etc. All these and violence against Dalits and women in general in several parts of the nation have aggravated social schism today. Rise of Modi unfortunately has been through a spate of violent riots killing more than 2000 people in Gujarat, some responsibility of which rests on the doors of the then rulers. Indian nationalism today stands bruised, divided and begging for a healing touch, which Vajpayee had.

Sixth, Vajpayee was the man who ushered in an infrastructural revolution in India. His model of development was inclusive, for the common man on the street, and focused on large-scale growth. He initiated the Delhi Metro rail as a mass transit system, and encouraged CM Sheila Dixit of Congress to take it forward. He brought in National Highway Development Project leading to East West North South Corridor or the Golden Quadrilateral, and put his confidante B C Khanduri to lead the project to success which has surely revolutionized road transport in India. He envisaged and executed the first round of Pradhan Mantri Gram Sadak Yojana which connected rural India greatly. And, indeed he managed the economy quite well with an average of 8% year on year GDP growth on the earlier parameters during his tenure as PM.

Modi has also ensured the rise of infra-structure specially in roads, power, ports etc. However, the showcase projects are of a cost-intensive bullet train between Ahmedabad and Mumbai in contrast to upgrading Indian railways as a whole; looking at health insurance benefitting insurance companies and private healthcare providers rather than upgrading public health infrastructure, and building high cost statues of historical figures rather than investing in public good.

Seventh, Vajpayee was the Messenger of Peace. Against many odds, he himself rode a bus to Lahore in 1999 for Indo-Pak peace, along with many Indian celebrities. Sad that the Pak hawks got the better of the civilian government in Pakistan and Kargil war was imposed. But it is to the credit of PM Vajpayee that he did not allow India to cross the Line of Control during Kargil War to avoid being called the aggressor and also taking care due to the Pak Nuclear status. He, even in duress, gave peace a chance.

Modi invited Pak and South Asian leaders to his oath-taking and attempted to continue with peace initiatives of Vajpayee and Manmohan times. But very soon his brand of politics degenerated into anti Pak jingoism on one hand, and failures to check China in Doklam or Pakistan from continuous cross-border terrorism. A bold surgical attack into Pakistan does not seem to have yielded any results. South Asia waits today to see if Modi's New India can shake hands with Imran Khan's Naya Pakistan.

Eighth, PM Vajpayee gave a great push to science and technology. He conducted Nuclear Test, Pokhran 2 in 1998, and made the hero of this achievement, Dr APJ Kalam as the next President of India, who was later named as the true People's President. Vajpayee coined the slogan: Jai Jawan, Jai Kisan, Jai Vigyan. He promoted scientific spirit, and not just technology.

In total contrast, Modi's approach has been merely using technology bereft of true scientific spirit. He himself speaks of Ganesha elephant-head as a plastic surgery, justifies Ganesha statues drinking milk, power being produced from gutter gas, etc, and his ministers questions Darwinian theory and makes a blend of mythology and scientific facts even on the platforms of Indian Science Congress.

Ninth, Vajpayee as a Prime Minister was against rule through ordinances, and while turning POTO into POTA (Prevention of Terrorism Ordinance/Act), he took the entire belligerent Opposition into confidence through his now famous tea-party diplomacy. His was a perspective of reconciliation with the Opposition, and respect and consensus for the allies (he ran a government of 24 parties).

In contrast, Modi allies like the Akalis, JDU and Shiv Sena still call for the 'Vajpayee touch' in current dispensation, Dalit allies keep threatening a walkout, TDP has been lost, while parties with weak mandate like AIADMK and with only regional interests in mind like BJD and TRS are being managed to be pro-government. On several occasions, Modi govt has ruled through ordinances to the extent that the former President Pranab Mukherjee had to pull up the government. There are attempts today to dilute the RTI Act, weaken the Election Commission, CIC, RBI and the independence of the Judiciary.

Tenth, as a person and politician, Vajpayee was not a hypocrite. The famous line of his, "I am a bachelor, but not a brahmachari", says it all. When he disputed on a serious point of difference, he did not play Dr Jekyll and Mr Hyde. Hence, when the RSS ideologue Govindacharya called him 'mukhouta', he ensured that this view does not gain currency. Govindacharya is still in political wilderness.

Modi's distractors have no place in his party, and the government claiming to be one with a difference had alleged rapists as Central and state ministers, several others as party MLAs, apart from allegations of snooping against Modi himself, and those of murder and intimidation against his Man Friday, BJP President Amit Shah.

So, there was the Right Wing leader Atal Behari Vajpayee (who was briefly into communism as a young adult during Quit India movement), who was truly the leader of a diverse India of many languages and religions, for whom reconciliation and engagement were the key words of politics, and who considered peaceful and mass-oriented transformation as the only to go ahead.

And, here is the Right Wing leader Narendra Modi, whose rule seeks to polarise India aggressively, even violently, to ensure communal consolidation of the Hindu vote-bank, and engages with other political forces only with transactional utilitarian goals only, who can be dispensed with when the needs are over. And for this extreme brand of Right Wing politics, development is more of a class through a narrow brand of crony capitalism. While Rajiv Gandhi had Bofors, Vajpayee had none, Modi has Rafael, and the political impact of the last one is just unfolding.

(The writer is a media academic and a columnist.)