It is common knowledge that the Jaipur Literature Festival (JLF) has grown to be the largest free literature festival in the world. However, what is interesting to see is the success of the Jaipur BookMark (JBM), a segment of JLF which deals with the business of books. 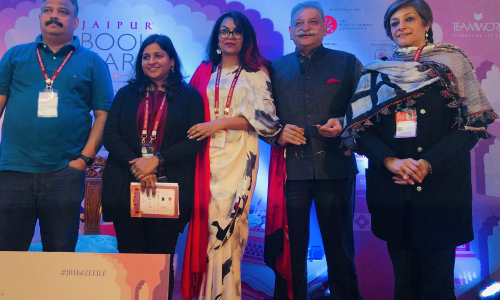 January 23 to 26 turned the heads of everyone affiliated to books towards Jaipur BookMark (JBM) that has grown steadily over the past five years since its inception. It is an ultimate South Asian book conclave which provides an 'edge' of opportunities to those in the publishing industry on the lookout for new ideas and collaborations.

It gives an opportunity to the stakeholders of the book trade; Publishers, Literary Agents, Translators, Book Sellers and Writers to not just 'talk business' but also provides an ambience to inspire conversations and networking.

Four days were packed with back-to-back sessions at multiple venues within the gorgeous venue of Diggi Palace, home of Jaipur Literature Festival.

We give you a sneak peek on Industry stalwart's views discussed in some sessions.

How Content is Consumed:
An interesting discussion on various angles of content consumption by the audience was between Anish Chandy, Bobby Bedi, Leeladhar Mandloi, Neelesh Misra, Smriti Kiran, Vikrant Mathur and Yogesh Dashrath in conversation with Vani Tripathi Tikoo.

The increasing number of platforms for digital consumption with the likes of Amazon, Netflix, Airtel, Jio and many more is a clear indication that the audience is hungry for good content. This content can be in the form of books, videos (YouTube), audio Books, digital (ebooks), movies, and much more – all compete for the same share of mind and wallet.

'One crore and ninety minutes worth of our content was consumed per month last year,' said Neelesh Misra, the founder of Gaon Connection who has created his niche by finding narratives from rural India and telling audio stories in a more extended format that have been greeted overwhelmingly by the audience. In this day and age where human attention span is less than that of a goldfish, Neelesh has managed to extend the duration of his twelve-minute audio stories to twenty-four-minute segments that reach over two million people every month.

Another example that reflects that audience for audio is growing at a galloping rate is the story of StoryTel – audio format books that claim to have one billion people listening. 'We have over 800,000 paid subscribers across the world and have 650 titles a year with 70 original series. We have an app too. Moreover, tracking the consumption minute by minute and can measure how much book is consumed by our paid subscribers,' said the Country Manager of StoryTel, Yogesh Dashrath.

Indie v/s Giants
Anna Solding from Australia is a multi award-nominated author and started her publishing firm a couple of years back. 'We had our share of initial struggles but now have titles that are best sellers with multiple language rights though all start-up publishing may not be as lucky as we have been,' she said. Other speakers at the session representing giants were Karthika V.K. from Westland Publication (India) and Jeremy Trevathan from Pan Macmillan (UK) – between them; they agreed that one needs money to market. New publishers are mushrooming, and there is space for all within the ecosystem, and perhaps a good way is to try and aim for a different mental bandwidth, create niche-publishing houses and find new voices within that niche.

Festival Director's Round Table
The panel presented an exciting round-table discussion on different literary festivals. What was more interesting was to hear of various issues that each person faced during their initial years. It was also inspiring to see how a few people have made it with their sheer resilience and passion for all things literary. Preeti Gill spoke about her Amritsar Festival that she started three years back with just 200 people and how it has grown and well received. From Bhopal, Chandra Raghav shared about issues faced with their first festival last year. Many other representatives participated, from Trivandrum Lit Fest, Lito Lit Fest Mumbai and Emerging Lit Fest – Melbourne. Besides Sanjoy K. Roy from Jaipur Literature Festival spoke of how he built this festival to what it is today – the largest free literature festival in the World.

Innovative Distribution Models
The panel discussed fascinating concepts during this session. 'There are not many publishers for poetry, and there are some brilliant pieces out there, and no one is willing to publish, so I started Walking Book Fairs, and we take our van from town to town and read poetry to people, and they buy books. We have had our challenges of sourcing books, but it has been a great journey,' said Satabdi, founder of Walking Book fairs.

Himanshu Giri, CEO of Pratham Books said, 'It was our conscious decision not to adhere to the market standards of margins. So we work harder and think of innovative methods like distribution through railways, online and have even explored crowdfunding for a few of our books and have been able to do a fabulous job so far.'

Another idea discussed was to distribute books through collaborations with larger publishers with synergy, but few members strongly voiced concern for cannibalisation. Every member agreed that boundaries should be respected and not impinged.

A common consensus by the panelists was that India is reading more. Digitisation has given opportunity not only to sell more but also to generate overall interest in reading and increase the intent to buy through video ads, YouTube content, e-books, audiobooks and translations of the same book.

About 40% of kids never read books as they do not have access. Publishers should try to increase the base by reaching out to them and hence the need for multi-line marketing for regions with no bookstores. It is interesting to find a market for book services like 'MarketMyBook' who take on the headache of marketing the book from publishers and independent authors. The founder of MarketMyBook, Lipika Bhushan said, 'Earlier only self-published authors came to us or smaller indie presses but now larger publishers are also coming to as they want to leave the marketing out to people like us and focus energy on publishing good content.'

Anuvad – Translating India
There are 128 languages in India and there are innumerable literary works that await translation. There is a dearth of translated work. One example out of many others is Perumal Murugan who gained more popularity after his book got translated. There are many gems in various languages. Now publishers are eyeing the translations. Sahitya Academy has 7000 titles. Every year, the work awarded a prize, gets translated into many languages.

Kalpana Raina, involved with Yali gets Indian translated work back to the US as they have figured out that 3-5% of all books sold in the US are translations of Spanish, French, German and nothing from the Middle East or India and South East Asia.

Now all international publishers are opening up separate divisions for translations which emphasizes the importance of translations in the literary landscape.

'Each year, JBM draws publishing professionals from around the region, indeed, the globe to be involved in a rich selection of stimulating, contemporary, and more importantly, delighting sessions. Publishing is changing; JBM is a successful forum to stay informed, to meet colleagues, to make new connections and to renew our joy in the idea of being involved in such a diverse and vital industry,' said a visiting delegate Shelley Kenigsberg, editor/writing mentor and director of Editing in Paradise.

iWrite
The iWrite program provides a platform for new writers. New manuscripts or even unpublished ones can send in their submissions and get them judged by a jury consisting of industry stalwarts. Top ten shortlists get a chance to pitch in front of the jury at Jaipur BookMark. Stupendous achievement for iWrite organisers was the fact that the three writers who got contracts last year, had their book releases this year.

iWrite shortlisted participants ranging from a student of grade 10 to a senior citizen of over 75 years in age presented well, and it was overwhelming to see options of being represented or published by literary agents and publishers - Anuj Bahri, Preeti Gill and Ramjee Narasiman.

'What should you do when you finish your book'
There was an informative dialogue between Anita Nair, Jayapriya Vasudevan, Meghna Pant and Paul McVeigh in conversation with Preeti Gill. 'Bestsellers in India are the books that sell over 10,000 copies, these constitute less than 1% of books published. Over 90% of books sell less than 1000 copies. Moreover, only 2% of books published in India reach a bookstore,' statistics shared by Meghna Pant, author of the first book on publishing, 'How to Get Published in India'.

We have seen an exceptionally well organised Jaipur BookMark constantly move notches up on the scale of perfection whether it is the kind of discussions or the panelists that they bring around the table. 'Once you understand the sheer numbers that India represents in business terms and the long-term opportunities in publishing and translation, the professional sessions at Jaipur Bookmark become all the more relevant,' said Neeta Gupta, publisher at Yatra Books and a literary consultant with a particular emphasis on translations. She is also the co-director of Jaipur BookMark festival.

Anuj Bahri, the founder of RedInk Literary Agency who was a member of Jury of iWrite, said, 'JBM is a great new global platform for discussing issues and innovations in books and literature. A new world that blends content and technology towards a secure future for books.'

Deeba Salim Irfan, the founder of TheWriteScene.com and the founder of Young Author Awards was in Jaipur from Dubai as a part of the Jury of iWrite, and she said, 'I am excited to be a part of this extremely vibrant atmosphere, and I have seen JBM grow over the past few years. There is a need for such programs in the market, and it was overwhelming to see the response. I now look forward to the writer's retreat I would be hosting in Kangra Valley (Dharamshala), end of March 2019 for a small group of writers who will get a chance to get their debut whetted by the commissioning editor of an international publishers and by well reputed literary agents.'

She is a brand expert and the founder of Young Author Awards, an initiative for under 30 years of age, Traditionally published authors. She is also the founder of TheWriteScene.Com a portal for aspiring writers. She is an award winning poetess (Book Excellence Awards 2017, Canada) with her poetry coffee-table book, ?CHARCOAL BLUSH?. Her debut novel was ?Urma? (2012) ? with a backdrop of Iranian Revolution which was translated into Urdu and nominated for an award. Her initiatives: http://www.youngauthorawards.com http://www.thewritescene.com Social: Twitter: https://twitter.com/writescenedxb Facebook: https://www.facebook.com/thewritescenedubai/