This time the Londoners didn't keep calm and carried on. The list of Trump’s flouts is fairly frustrating folks. 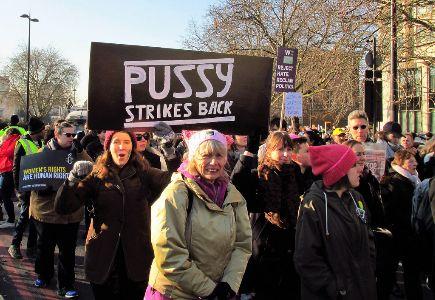 It was a pretty hot day, an un-British weather with sweltering heat testing one's endurance. And so was the political climate in the UK. Thousands of people including children from all parts of the country gathered in London to display their dismay towards the most powerful man on the planet - the president of United States - Donald Trump. Placards and banners read all sorts of messages one can imagine with some of them crossing the line of decency. I did ask the question regarding the usage of objectionable language to one of the protesters, who then reminded me of how Trump, before being elected as the president, rodomontaded about grabbing the women by their pu***. "He shouldn't mind'... he deserves…" said a young woman holding placard that read "Go Fu*** Yourself".

Trump ignited a controversial fire much before landing in the UK by suggesting his meeting with the Russian president Vladimir Putin, after the UK trip, might be "easier than attending UK". Once he landed came The Sun Interview where he suggested that Boris Johnson, the nemesis of the current prime minister, would make a good PM. Within 24 hrs he retreated and as anyone knowing him would expect, he blamed the media for spreading 'fake news' despite everything was on record.

People who held similar views as Trump on immigration were against the idea of protest, especially by floating a giant baby blimp in the air with tiny hands and orange body, characterizing him as a grumpy infant. They blamed the mayor of London, Sadiq Khan, of misusing mayoral power for wreaking political vengeance by allowing the balloon to float over the houses of parliament. In the past, Trump had attacked Khan for "failing to protect London" and curb terrorist activities. Various groups joined hands for the protest which remained peaceful amid unprecedented security measures.

The entire spectacle aside, the question still remains for the protestors: how to deal with a world leader who changes his statements at the drop of a hat and blames it on anyone but himself. Those who watched the press conference at the UK prime minister's residence would not forget his hackneyed rant about media. Trump knows how to take the advantage of a situation. People might consider him heavy handed, but he delivers the blow at the right spot. In that very press conference, he showed solidarity with the PM, suggested that he had a better way of dealing with Brexit, reiterated the special relationship with the UK, again hinted that how important it was to get a deal with EU for the UK to get one with US and then hailed the British prime minister with all adjectives repeating several time in his classic Trump fashion! It's like an updated version of carrot and stick. It's chameleon diplomacy. It's difficult to reach a conclusion on the basis of his statements. No wonder, Washington Post is keeping a record of 'false claims' by the U.S. president, who according to the website has 'misled people' more than 3000 times and it counts.

With the UK government struggling to strike a trade deal with the EU, the prime minister leading a fissile cabinet with a slender grip and daily resignations, there were not huge expectations from Mrs. May. Certainly not of an overt criticism of Trump's views on immigration, which by the way he counted as 'one of the reasons people voted for him', or NATO, climate change etc.

Here is a list of things which would remind the people how little these protests mean compared to the diplomatic storm kicked by Trump and therefore they would have to keep the spirit alive for quite some time. He has disregard for NATO, Rubbishes climate change as hoax, Undermines United Nations, Started a trade war, Suggested France to leave the EU, Insulted Germany by suggesting that it plays at the hands of Russia, Called the Canadian Prime Minister dishonest, Called few countries as Sh**t hole nations, Showed contempt for G7 and the list continues. Will keep you updated.