As the Indian government is inking deals with foreign countries like Israel and Canada, the solution is there in India's rich traditional past. This is the second of a 3-part series about water crisis in India. 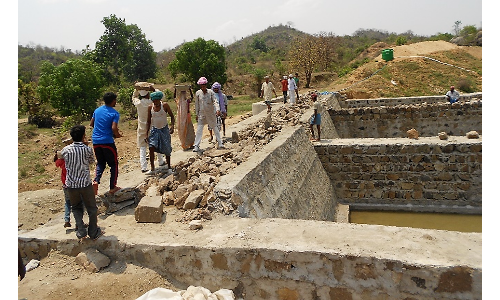 Budha Budhi check dam being built under the aegis of Aakar Charitable Trust led by Mrs. Amla Ruia in Rajasthan. Villagers pitch in with either monetary aid or manual labour during the development.

Water crisis is not a new phenomenon, and governments across the country have been trying to find a solution to it beginning of every summer. Yet our response to water management has been quick-fix and faulty, instead of a long-term plan. Sending trucks and trains full of water can only be seen as temporary and non-sustainable, leading to huge expenses on the already in-debt coffers and taxpayers money. A common by-product is the rise of local water mafia, often in cahoots with the politicians or cops, who further torment the already frustrated citizens of the country.

One common factor in faulty government programmes is the lack of enough research to back the developmental plans. For instance, let's take the case of borewell pumps which are the most common way to extract water from under the ground. Indiscriminate numbers of borewells will drastically reduce the water table and the level will fall. Just as wells ran dry, so will the bore-well pumps yet we hardly take into consideration recharging the underground table – one of the most important factor of water management. Lacking foresight, we invest in a solution which brings us instant relief, but fail to invest in a sustainable model, where water table will recharge and remain beneficial over the years, without the source drying up.

The catastrophe of indiscriminate borewell use on depleting water levels is being felt across India but creation of dams has had an equally devastating effect and so has GMO crop cultivation. As acres and acres of agricultural land turned arid and infertile, locals stepped up to find a solution, going back hundreds of years. Locals, educators and social workers went back in history and convinced villagers to adopt the age-old practices of water conservation and irrigation, which yielded bountiful results.

In a report recently published by the Hindustan Times, a village in Bihar has turned their arid lands into thriving agricultural fields. A local college professor familiar with the techniques of Mauryan technology, involved the villagers of Magadh who donated money, built traditional channels and embankments to irrigate fields. Mrs. Amla Ruia has built over 270 traditional check dams across Rajasthan and continues to work in the field, earning the monicker Water Mother of India.

When 28-year-old Rajendra Singh quit his job and left his family in Uttar Pradesh to come to a small village in Rajasthan's Alwar's district way back in 1985, it was for a very different objective – to build clinics. After initial hiccups, Singh learnt about a johad, a large crescent-shaped dam made of earth and rocks, which used to be reservoirs to collect rainwater in 1500 BC. It would also let water percolate into the ground and thereby improve the water table. "Two decades after Rajendra Singh arrived in Rajasthan, 8,600 johads and other structures to collect water had been built. Water had been brought back to a 1,000 villages across the state," observed the Stockholm International Water Institute in 2015 while awarding Singh.

Many NGOs left the field of water management believing that NREGA schemes would deal with the situation, but the reality is not so. Although money is being spent on building dams and water harvesting system, due to faulty planning, lack of research and below-par materials, these projects either remain unfinished or non-operational. The government is further inking deals with foreign countries like Israel and Canada to find a solution. As the list of states facing acute water shortage keeps getting bigger, it is important to realise that the solution to it can't be a quick-fix but a long-term well implemented plan.

As already proven by enterprising individuals, the solution to water crisis is actually closer home and one need not look elsewhere.