Report News
Home > Editorial > A Messiah in the Making

A Messiah in the Making

Yogendra Yadav of Swaraj India Party seems to have an ambitious vision of reformulating the politics of India. 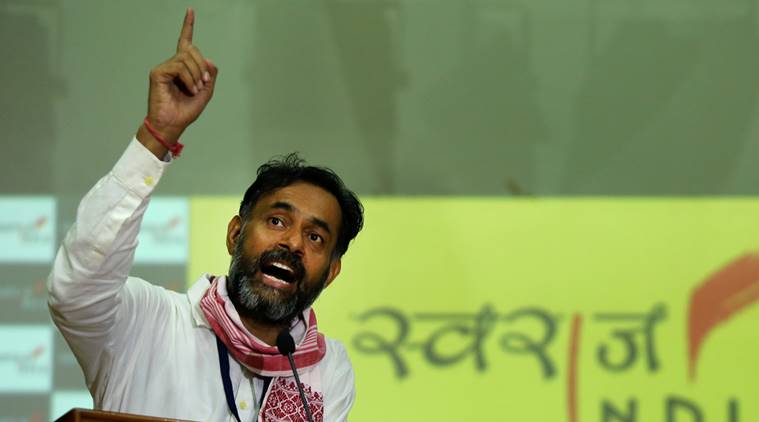 On the 21st of February, I attended a condolence meeting held by Swaraj India Party in Bengaluru for Shri Puttanaih, the farmer-leader who passed on last week after a sudden heart attack. The meeting was presided over by Professor Yogendra Yadav, one of the founders of Swaraj India.

A group of about 30 people patiently awaited his arrival from Delhi. We have all seen him on TV channels where he is invariably seen as putting forth a balanced point of view regarding the debate at hand. Soon, a tall, slim, middle-aged man walked in and took his place in the circle of members squatted on the floor in the new office of Swaraj India in Bengaluru.

After a two-minute silence for the departed soul, Yogendra Yadav began to put forward his views on the aims and goals of the Party. He began by politely admonishing the members for giving him a small bouquet of carnations, saying that the money could have been spent for better purposes! Proceeding in the same vein, he said that he wished to do away with the practice of using plastic coffee cups at gatherings and use utensils instead which could be washed by the members themselves. These small details, he pointed out, would help to usher in a "democratic, egalitarian political culture" in the Party.

When he began to spell out the goals of Swaraj India Party, it became apparent that its founders are more ambitious than merely wanting to enter the electoral fray. They wish to initiate a search for an alternative politics; a return to the values of the freedom movement of the idea of India as a secular, democratic Republic. The essence of India is being challenged, he said, and the task before the members of Swaraj India was not merely to bring down this or that political party at the hustings but to restore the country to its core foundational values, honed and enunciated during the freedom struggle. "We are fighting to defend the soul of this country which today can be done only through politics" he said in his even staccato tone.

Painting the raison d'etre of Swaraj India with broad strokes was all very well, replied his audience but please could he come down to brass tacks and give them the message to be conveyed to the people in the coming Assembly elections in Karnataka in order to win seats. Here, Yogendra Yadav pointed out that one strategy that could to be followed is to concentrate on the constituency of farmers and youth. While he has been fairly successful with the former and Puttanaih, the only farmer MLA in the Assembly, had joined the Swaraj India Party before his untimely death, wooing the constituency of youth should be taken up in earnest. "Go to the colleges and connect with the youth" he exhorted the members. "Look out for young people who are channelling their energies in caring for their pets or in doing social work in slums and inform them that there is a forum like Swaraj India where they can express and channelize their angst for the greater good" he said. In the '50s, if you were young, you were a socialist. Seventy years down the line, 'youth for Swaraj' should be the driving force.

Interestingly, he opposed a dedicated women's cell in the party saying that women should come to the fore on the basis of their own achievements rather than ride in on the basis of gender. Similarly, he was not in favour of an OBC unit, a Dalit unit or a Muslim unit as this would segregate, trivialise and reduce their problems to an exclusive politics. "Creating a box does very limited politics" he explained. The disadvantages that these groups face, such as lack of education, poor health services etc., are shared and should be the focus of discussion by the members. Finally, he ended by saying that "we are not saying anything new; we are simply articulating the values of the freedom struggle, which were secular, anti-colonial and modern and have been lost over the last seventy years."

From all this, it was evident that Yogendra Yadav was more of a messiah in the making with an ambitious vision of reformulating the politics of this nation and looking at the long-term consequences of the Swaraj Abhiyan movement rather than the short-term goals of winning an election, though this too was welcome!