Kuldeep and Rahul, a blessing for Indian cricket

India wins the opening match against England in T20 international. 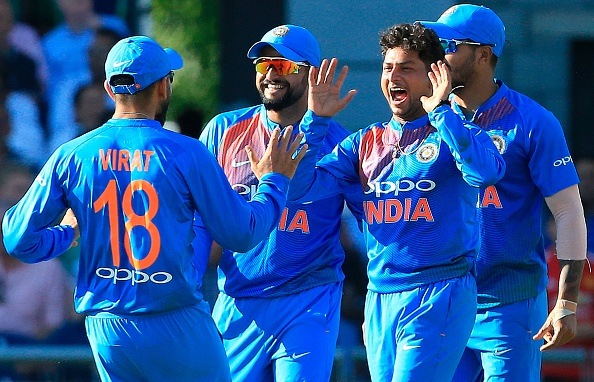 Indian players celebrate with triumph as they knockout England in the opening match of International Twenty20. Indian skipper in a statement said, "Lethal Kuldeep Yadav key for Indian cricket team against England" as newcomers Kuldeep Yadav and KL Rahul steal the show.

A young Kuldeep Yadav won the hearts of many Indians with his outstanding performance. Yadav is the first Indian chinaman bowler who single handedly restricted England with 5/24 in 4 overs. Yadav went on to win the man-of-the-match after achieving the best figures of his career.

Yadav dismissed rival skipper Eoin Morgan (7). Jonny Bairstow (0) and Joe Root (0) who were brought down in by Kuldeep in the 14th over. The rosters were left astonished as they were not prepared for his slow ball.

Opener KL Rahul achieved his second T20 International century scoring 101 runs off 54 balls. Rahul's thrashing helped India to reach the target in 18.2 overs. In his innings Rahul hit 10 fours and as many as five sixes.

Virat Kohli went down in order to allow Rahul to play. The young player got a chance to play after Manish Pandey was dropped due to an injury. Indian skipper Virat Kohli finished the match with a six Moeen Ali and remained unbeaten on 20.

The decision to promote Jos Buttler to the top of the order proved an inspired one as England bashed Australia for 221 in 20 overs at Edgbaston last week.(the telegraph)

However, England started off well with both Buttler (8x4, 2x6) and Roy (5x4) hitting a flurry of boundaries off Bhuvneshwar but Umesh Yadav (2/21) quickly found his ideal length.(the Hindu)