Reserve Bank of India cuts repo rate by 25 basis points making it three cuts in a row. They have also done away with the NEFT and RTGS charges to boost digital transactions. 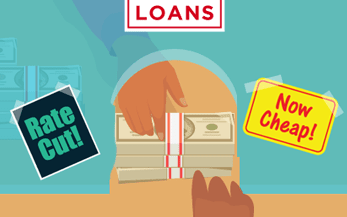 The Reserve Bank of India's Monetary Policy Committee led by Governor Shaktikanta Das on Thursday cut the Repo Rate by 25 basis points, making it three cuts in a row and bringing it to a nine-year low.

Repo Rate is the rate at which the RBI lends money to commercial banks. The latest cut today comes at a time amid falling economic growth and uncertain global scenario when India's Q4FY19 GDP growth rate fell to a five-year low of 5.8 per cent. The RBI also revised GDP growth for FY20 downwards to 7 per cent versus 7.2 per cent projected earlier.

From the current 6 per cent, the Repo Rate at which banks borrow money from RBI now stands at 5.75%; and the reverse Repo Rate, at which banks lend to RBI, is now at 5.5. The cut on its policy interest rate was a widely expected move and this has shifted the policy stance to "accommodative" from "neutral" to boost a slowing economy.

The Reserve Bank of India will also do away with the charges levied for RTGS and NEFT transactions. The announcement was made in the Statement on Developmental and Regulatory Policies, released today as part of RBI's monetary policy review.

This move is a boost to newly re-elected Prime Minister Narendra Modi as he grapples with sluggish economic growth and decades-high unemployment. He stormed back to power last month for the second time with a greater majority despite question marks over his economic record during his first term as leader of Asia's third-largest economy.

Rivika Saha, Assistant Manager, State Bank of India, Mumbai, said, "As per the latest announcement in Repo Rate Cut, the adverse effect in the economy would be that people would lose on the interest rates that they will earn from their social security schemes they would want to invest in. Senior Citizens and Pensioners would be at a disadvantage too. The advantage of this cut would lead to an increase in people wanting to invest in corporate house loans. The interest outflow will also be lesser for loans and advances. Overall, I think it is an advantageous decision."