The rise of voluntary associations in Bengaluru

Citizens groups are coming together to form groups that can demand a tangible democracy and ensure check and balance for the government and people. 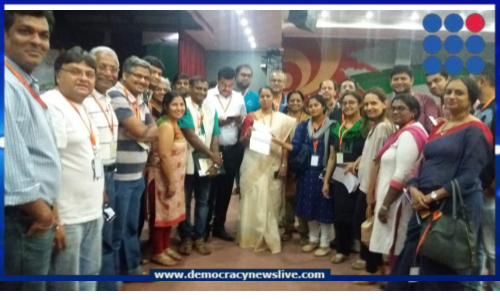 Recently, two voluntary associations celebrated their anniversaries in Bengaluru. Citizens for Bengaluru (CfB) celebrated its second anniversary since it organised a human chain of 8,000 people to protest against the steel flyover across the city proposed by the state government. The Organic Terrace Gardens (OTG) celebrated its 24th anniversary since its first workshop conducted at the Institute of Agricultural Sciences by its founder Dr. BN Viswanath. Another movement that is spreading rapidly is the demand to revive government schools, led by Anil Shetty.

Indeed, voluntary associations have come of age in namma Bengaluru. Gone are the days of the '50s and '60s when people looked up to the state to fulfil their needs in a form of ma-baapism. With the opening up of the economy in the 90s, NGOs mushroomed in every field to hold the hands of Indians as they moved into the newly privatising economy. Following the decline of NGOs in Karnataka due to a fund crunch, people are now learning to solve their problems through voluntary associations set up by them.

The importance of numbers in a democracy

There is a realisation that, in a democracy, numbers count and large numbers of supporters can nudge the government to take up programmes which they consider as beneficial to the people rather than to the political or business classes. The CfB for instance said that they "first tasted success" when the steel flyover project, going into crores of rupees, was shelved. They are now petitioning the local government to hold ward committee meetings in order to further transparency and accountability in local governance (see picture above). The NGO Civic has single-handedly tried to activate ward committees for the past 25 years but to no avail. The CfB is confident of doing so on the strength of its organization and numbers. The Mayor has agreed to call for ward committee meetings on the first Saturday of every month.

Writing in 1835 during his tour of North America about the penchant that Americans had for starting voluntary associations, the French aristocrat and liberal Alexis de Tocqueville stated in his book Democracy in America, that he considered this practice as furthering the cause of democracy. He said, "Americans of all ages, all stations of life and all types of dispositions are forever forming associations… I have often admired the extreme skill they show in proposing a common object for the exertions of very many and in inducing them to voluntarily pursue it." Today, we can see the same proclivity for starting voluntary associations in Bengaluru.

Here, it is the middle class which is assiduously creating voluntary associations for taking up public causes. Dismissed in 1998 by Pavan Verma in his book The Great Indian Middle Class as materialistic, apolitical and self-centred, the new Indian middle class since liberalization has metamorphosed into a body that actively pursues issues of public interest with great enthusiasm.

Thus, the middle class which, till a few decades ago lived in an ivory tower leaving the 'dirty work' of governance to others while they concentrated on their lucrative and stable salaried jobs in the erstwhile socialist era, have undergone a sea-change. They are now themselves eager to have a go at governance and since their numbers have swelled, they can no longer be taken lightly by the local politician.

The role of social media

In this quest, they are greatly aided by social media in their bid to communicate with one another and the Internet-savvy public at large. In an instant they are able to vent their frustration and anger in Whatsapp messages or Facebook texts at the powers-that-be, whether it is their difficulty in commuting on roads jammed with traffic or whether it is the air and water pollution rampant in the city.

Indeed, with increasing urbanization and also due to the slow moving out of poverty of the masses, the urban middle-class numbers have swelled to the extent that they are now taken seriously by the ruling class. Bengaluru has a population of 12.5 million, a sizeable number of which belongs to the educated, English-speaking middle-class. Hence, the meetings of these associations are generally held in the English language, pointing to the cosmopolitan nature of this class which also has a large migrant population.

It may be noted that the methods of protest deployed by the members of these associations are strictly democratic in nature. There is no question of a rasta roko or a bandh/hartal here. Instead the members assiduously woo their BBMP Councillors or MLAs through Whatsapp and other messages and even postcards, to heed the demands of the people and present them in their Council meetings. These communications are done in the form of campaigns with a great deal of technical sophistication and finesse.

Voluntary associations got a fillip with the introduction of Resident Welfare Associations in the 2000s. They took up local issues such as cleanliness drives, lake conservation, street lighting, solid waste management etc. Similarly, the OTG movement has area-wise terrace gardeners all over the city whose members show off their terrace garden mini-harvests on their Whatsapp messages and receive hearty applause in the form of virtual hand-clapping for the same! In fact, in the last three years, the immense popularity of Whats App messages has aided the OTG movement in spreading like wildfire throughout Bengaluru. Thus, the umbrella associations that we have mentioned earlier are not a pie in the sky but are supported by a groundswell of local bodies that sustain them.

That Bengaluru has a unique position in the country as the seat of a young, highly educated, technically savvy, widely-travelled and populous middle-class has, in no small measure, been to its advantage in airing its grievances and doggedly pursuing its goals, despite the stoic indifference initially shown by politicians. Members are conscious of the challenges they are up against in bringing transparency in local governance.

The essentially frugal nature of these middle-class movements is evident in the solutions they offer to the government. Instead of multiplying private vehicles on the streets of the city, they say, go in for the suburban rail, or better still, cycle or walk to your destination! They entreat the government to give good educational facilities to the poor. Similarly, the OTG movement attempts to take people back to the days of natural farming without chemical fertilizers or pesticides. They recommend growing vegetables without incurring much expenditure in the limited space of one's terrace garden. In all this, though they could themselves buy the latest car model or send their children to the best private schools, they take up cudgels on behalf of the entire body politic which also has consequences for improving the lives of the underprivileged in the city.

Another characteristic of the members is the declaration of their undying love for the city. Not only would Bengaluru lose its aesthetic appeal by the proposed elevated roads criss-crossing the length and breadth of the city, they say, it would become a sore sight for the eyes in the foreseeable future with construction debris strewn all over the city. In fact, an earlier protest against the Metro which, according to them, should have gone underground particularly in places like their beloved MG Road or CMH Road, fell on deaf ears, perhaps because the CfB movement had not acquired enough steam by then.

Thus, unlike in earlier decades, when the middle-class remained aloof and alienated from their politicians and the problems of the day, today they are pitching in and giving their whole-hearted attention to various issues. This phenomenon is particularly evident in Bengaluru but it can also be seen to a lesser extent in sporadic incidents in other cities as well, such as the outpouring of grief coupled with the demand for safety of women in the case of the unfortunate Nirbhaya episode in Delhi in 2012.