Ever since the union government scrapped Jammu and Kashmir's special status, the state has been under a lockdown that has almost brought life in the Valley to a standstill, particularly affecting trade and commerce. 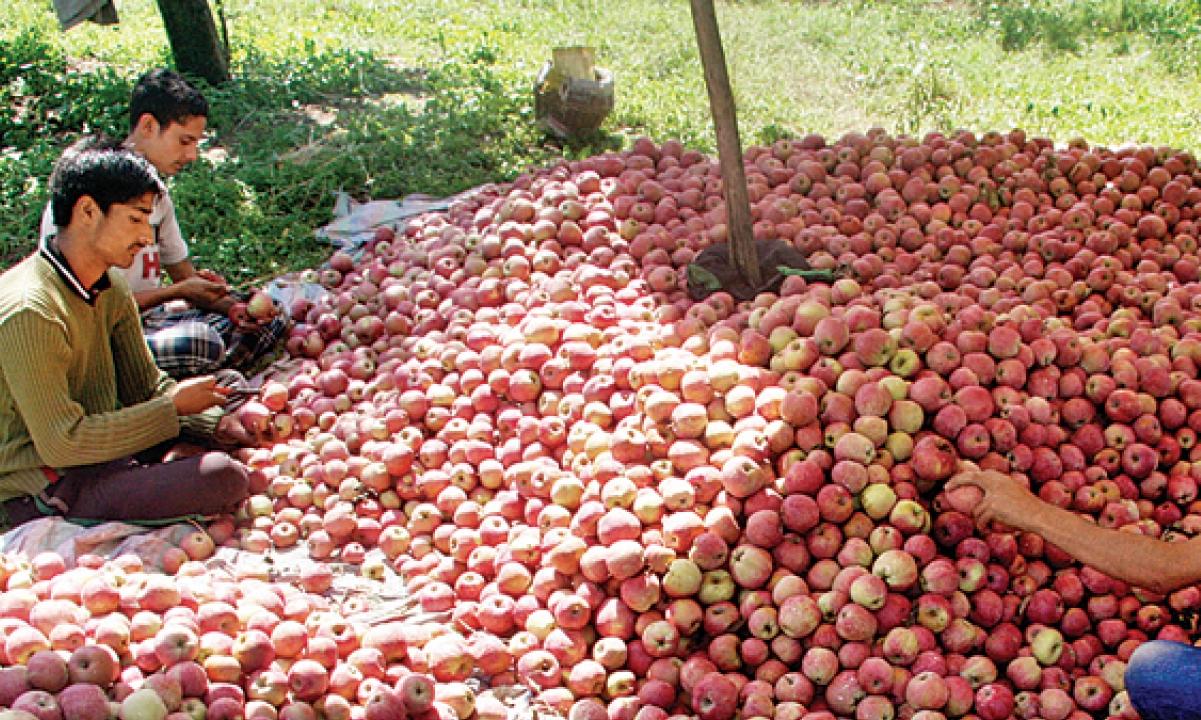 Salim from Baramulla would have made up to three trips to Delhi by this time in the year, bringing apples from Kashmir's orchards to the capital's Azadpur fruit market, and taking consumer goods on his return journey. This season, however, he is on his first trip to the capital.

He said, "This is the first time I have stepped out of my district in three months. We are suffering on all sides -- our earnings have fallen, we have to face stone pelting at nights, and mandi officials frequently issue us chalaan (fines)."

Ever since the union government scrapped Jammu and Kashmir's special status on 5th August 2019, the state has been under a lockdown that has almost brought life in the Valley to a standstill, particularly affecting trade and commerce because of restrictions on communication and movement. The state's famous apple trade has been affected.

Vijay Kohli, 30, hails from Jammu. He said he would save up to Rs 25-30,000 a month from his transport business, but it has now almost halved.

'I am bringing apples grown in Sopore via Jammu. Any other year, I would have made five trips by now. This time, this is my first trip,' he said.

It's not just drivers from Jammu and Kashmir who have been affected by the ongoing situation in J&K. The labour at the Azadpur mandi, mostly from Uttar Pradesh and Bihar, also claimed to have seen a dip in work and earnings.

Those around him mostly nodded in agreement. When asked about the government's move on Article 370, they all nodded in appreciation.

"We think they did the right thing but it has now affected our livelihood," one of the workers said, who refused to give his name.

Those from Kashmir were, however, severely critical of the move. Shabir, 25, from Pulwama, likened Article 370 with 'marriage with India' and said that its abrogation was a divorce with the Indian state.

'Jab miya-biwi nahi raazi, to kya karega qazi,' quipped Shabir. On the trade front, he said, 'This is the first time my owner has sent his truck out of the Valley in 54 days. Tell me, how will I earn when my owner will not earn?'

Regarding trade, Shabir added, 'Markets in Kashmir are mostly closed and there is barely any demand there, so we don't have anything to load from Delhi to deliver in Kashmir. That way, one half of our earnings has gone away entirely.'

A driver from Punjab agreed. The driver, who refused to give his name, said he used to take vegetables to Kashmir but he now takes goods to Himachal Pradesh instead on lesser profits as supply to Kashmir has come to a halt.

Traders at the mandi, known as aarhati, gave a sober account of the situation.

'There is indeed a fall in supply from Kashmir, which is a gain for Himachal's apple,' a trader of Himanchal's apple at the Azadpur mandi said. The trader added, requesting anonymity, 'But supply is picking up and we believe equilibrium between the two (Kashmir's and Himachal's apples) will be reached soon.'

MR Kripalani, the president of the Kashmir Apples Merchant Association, dismissed fears of a steep fall in supply and loss of trade.

'250-300 trucks are coming here from Kashmir everyday. As per this morning's figures, there are 320 trucks from Kashmir, 59 from Shimla, and 60 from Kullu. The trade was affected till 27 September but it's now more or less on track,' he said. As for reports that people in the Valley were not selling their produce to the government, he said, 'We have given them advance payments. It's natural that they would therefore sell their produce to only us and not to the government, even if there is some delay.'

Another group of aarhati at some distance from Kripalani said that, even though the trade has certainly been affected due to the ongoing situation, it is picking up pace.

'The supply this year is less by at least a quarter, even though it's picking up now,' one of the aarhatis said, requesting anonymity. He added, 'Most of this is because of troubles in South Kashmir, where there is local resistance. Trucks have been attacked and threats have been issued against selling the produce.'

Just across the road from them, a truck driver from Srinagar, who had earlier been driving a Tata Sumo taxi since 2009 and who only recently switched to truck because taxi business had come to a halt, showed us the broken glass on his truck.

Requesting anonymity, the driver contradicted reports of people burning their produce. He highlighted the danger of taking apples out of the Valley.

He said, 'We cannot drive off the national highway. If we do, we are pelted with stones, and they take over our trucks and throw our apples on the road to rot.'

Shabir from Pulwama had also complained of the same. 'My owner did not allow the truck to leave for 54 days because of the fear that it might be caught in stone pelting, or, worse, our stock stolen or thrown off. There will be no truck to drive if there is no truck!' He said.

Between drivers from Kashmir, daily wage workers at the mandi, and aarhatis at the mandi, the impact of the lockdown is all too apparent, just the scope may differ. The well-off aarhatis and seths of the mandi may have the capital to absorb the losses, but how long will the workers from UP and Bihar, and drivers from Kashmir, who are dependent upon the trade will be able to absorb it? Only time will tell.