While it seemed like nothing seems to be going the BJP way, BJP has turned the guns on Congress with the revocation of Agusta and now the not-so-subtle promotion of 'The Accidental Prime Minister', the mud-slinging continues. 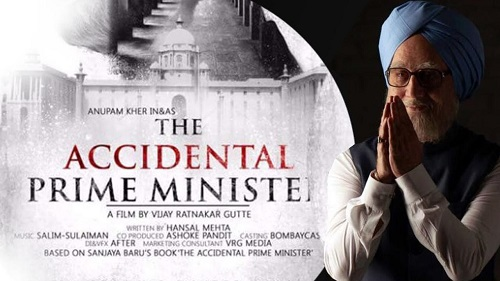 Ever since the trailer of Anupam Kher-starrer 'The Accidental Prime Minister' has been released, it has been entangled into controversies. The film has landed itself into a political debate. After the trailer was launched, several political parties raised uncomfortable issues and even questioned the timing of the trailer and the film.

The biographical political drama 'The Accidental Prime Minister', scheduled to release on January 11, has raised political temperatures with the Bharatiya Janata Party (BJP) latching on to it to hit out at the Gandhi family. While the Congress has questioned BJP's motive behind 'promoting the film' and raised objections to the 'incorrect presentation of the facts' in the film, the trailer of which was released on Thursday.

Reeling under the 'real'ity
The makers of 'The Accidental Prime Minister' have unveiled the trailer of the film which stars Anupam Kher essaying the role of former Prime Minister of India Manmohan Singh while Akshaye Khanna essays the role of Sanjaya Baru who was Singh's media advisor and chief spokesperson between May 2004 and August 2008. It goes on to provide a dramatised telling of key moments of Mr. Singh's tenure as the PM, focusing on a tug-of-war between him and the then Congress President, Ms. Sonia Gandhi, as detailed by Mr. Baru. The trailer also features Aahana Kumra and Arjun Mathur playing the roles of Priyanka Vadra and Rahul Gandhi, respectively in the film. The film's plot is narrated through Sanjaya Baru's character.

While the Madhya Pradesh government has denied banning the movie, Congress seems to be more than happy to let their party hoodlums threaten, create a ruckus and disrupt movies that go against the party or the "image" of the Family. They also say that the way Manmohan Singh, Sonia Gandhi and Congress party is shown in the movie is not acceptable to them. Sources said the party's top leadership has taken a view that the 'The Accidental Prime Minister' is a BJP propaganda and should be ignored. According to another media adviser of Manmohan Singh, Pankaj Pachauri, the film is nothing but part of BJP's election campaign.

Anupam Kher was fervently active on Twitter to share his concerns after the trailer of 'The Accidental Prime Minister' went missing from Youtube. The former prime minister will create a space for himself in the hearts of the people of India after the film, based on Singh's former media advisor Sanjaya Baru's 2014 book of the same name, Kher is reported to have said.

Leaving you with a tweet from Anupam Kher as he questions YouTube as the trailer of his movie goes missing: