It would be like stating the obvious that a certain element of that intriguing chemistry sets in the minute one thinks of these two different genres of actors par excellence. 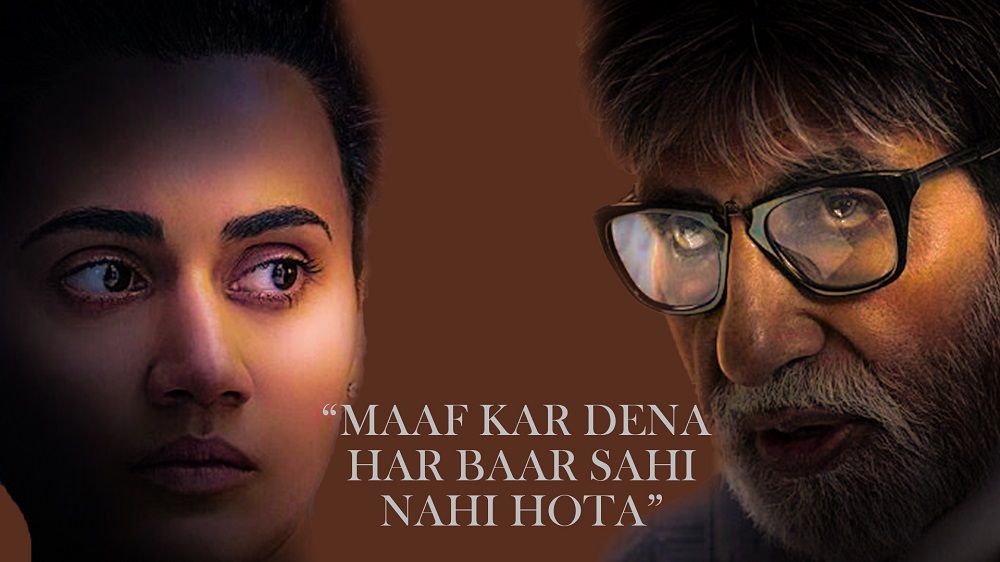 Bollywood VS Hollywood
Going further down to critiquing various other aspects of this film; first of all, the plot - it was quite well defined and also executed convincingly by the talented cast or let's just say it was very much in line with its Hollywood original, 'The invisible guest'. The other big win for this one is its very crisp script. A few minutes later into the movie, one will begin to experience the Hollywood influence in even the detailing of some shots like the jungle sequence which is the turning point in the plot, warranting a close watch. The film runs for precisely 2 hours which adds to its effectiveness.

Taapsee proves her metal again. She has done fair amount of justice to her role again or may be every time she shares screen space with the legendary Mr. Bachchan, she naturally becomes a bit more magnified than what her role may be, is it the rub-off effect? However to be fair, two things are noteworthy in her characterisation in this; first, her effortless dialogue delivery (overpowering Mr. Bachchan at least twice), and secondly, her 'poker face' which is integral to the impact of a plot which may come across as a bit predictable (to a few) but mostly gripping enough for the audiences to enjoy it anyway.

There's 'Mom', there's 'Matr' and there's Amrita Singh
Amrita Singh has marketed her come back just right, very convincing in her performance. From the mother in '2 States' to being a mother in this one, she does mark her transformation.

Some weak 'needs improvement' areas of the film is the editing, which could have been stronger as couple of times one would have an inconclusive turn rendered clueless which should have added up but does not. The other one is, a better supporting cast as they do have significant roles to play and the audience would have connected with familiar ones a wee bit better.

Otherwise and over all, this one is a well directed and a well finished flick, so much that a one-time watch is definitely recommended. Badla is a sweet revenge against a few of the not-so-nice releases in the recent past. This one is essentially for all AB fans.