Report News
Home > World > Brexit: Leave or Remain? Who has the best arguments?

Brexit: Leave or Remain? Who has the best arguments? 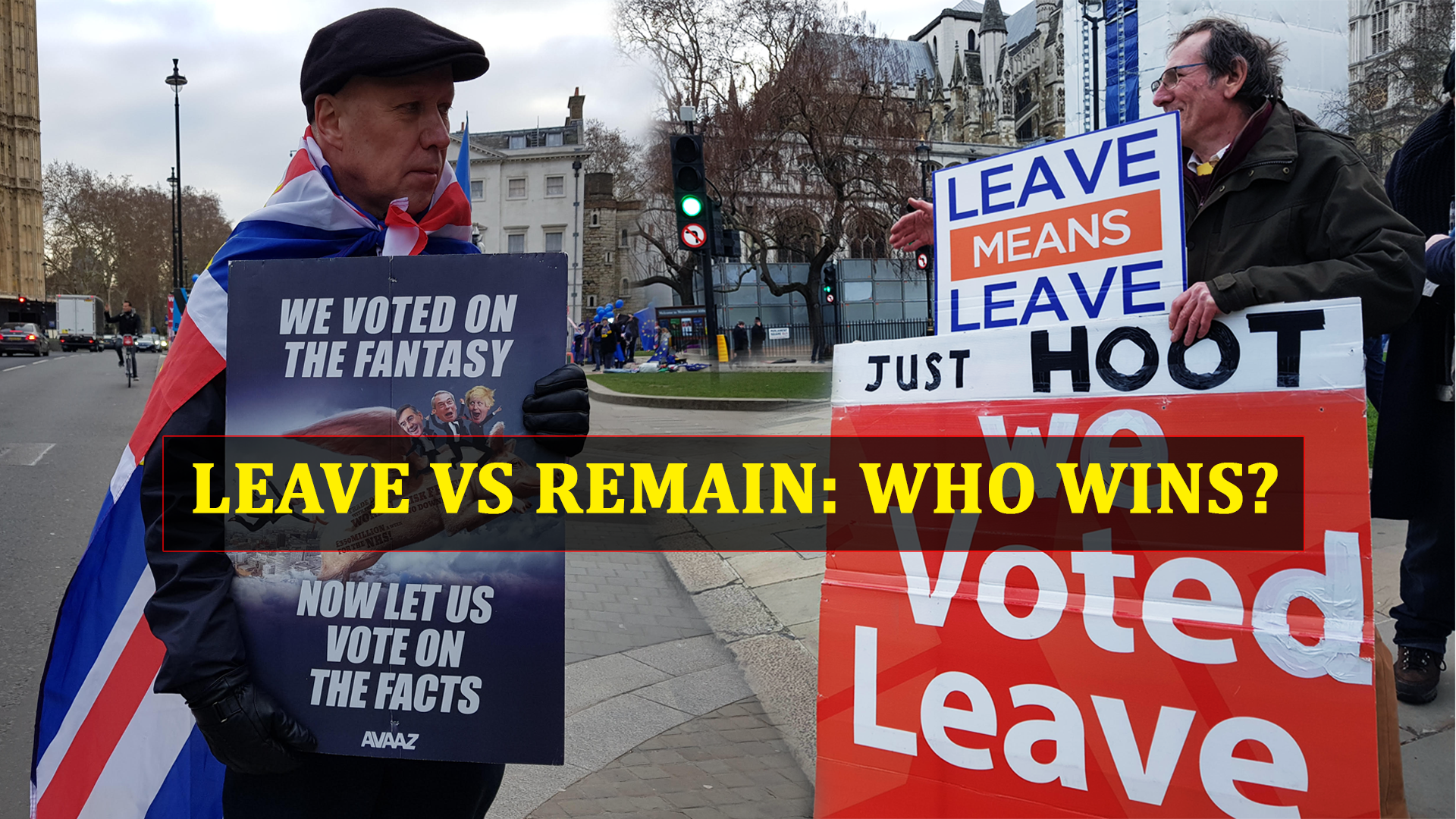 Leaving European Union is not leaving Europe say the Leavers while Remainers call for a second vote on Brexit.

On a chilling Tuesday in London when the mercury plummeted below zero, unfazed by the weather, hundreds of people gathered outside the houses of Parliament. Protest at Westminster is not a new thing but the gathering of people these days is different from the regular marches. There are two camps at the parliament square. The first one belongs to those who identify themselves as 'Hard Brexiters' and the second comprises of people who identify as 'Remainers'. This is about the political chaos in the United Kingdom known as Brexit and we set out to understand the arguments of both sides.

Armed with placards and slogans both Remainers and Brexiters could be seen passionately making their case. I started with the first camp which is right at the parliament square. Few steps away from the statue of Churchill, I met Thomas who held a placard reading: "walk away, no deal from EU". In his late fifties the man is painter who brushes aside the accusations of being anti-immigrant.

"Let people come in here properly. Come to my country if you have got jobs. We have got too many people living on the streets. Too many unskilled people, children, young men…we are getting too much cheap labour…cheap labour from Europe."

It is not that the leavers have just one uniform understanding and opinion on Brexit. In the same camp, I came across Michel who is a pro-Brexit and but also pro-business with EU. Born to a French father and Polish mother Michel identifies himself as British and claims that he is not against Europe but European Union.

"European Union is different from Europe because Europe is a continent of nations whereas EU is a project to try and federate nations into a super state thereby relegating states to no more than regions of those super states...and then bit by bit eroding their sovereignty", he said. Gary, a leaver, agrees with Michel and adds "we are quite capable of looking after ourselves. I just don't want United States of Europe".

By the time I finish my conversation with Gary, it is late afternoon. It is time for them to take a coffee break with the weather in no mood to offer any respite. I leave them with the 'promise' of getting covered as they complain about media supporting the leave campaign.

Few hundred yards away there are children, men and women smiling, singing with the EU flags in their hands. Some of them are taking selfies and others waving to the drivers to honk in their support. A woman in red is surrounded by people as she makes case for remaining in the EU. She is Ruth, an activist, who answers me on the issue of problems in the UK because of the immigration by saying the following.

"There seems to be a fear of foreigners and our mass media has blamed migrants for the problems that we have in this country. Thanks to the government. It is not because of the people coming in."

Steps away from Ruth is standing a man from Wimbledon who holds a placard which shows Nigel Farage, Boris Johnson and Jacob Rees-Mogg (Brexit supporting Politicians) riding a pig with a slogan next to it: "we voted on the fantasy, now let us vote on the facts. An ex-Civil Servant, Paul, argues for a second round of vote. But would that not be a betrayal of democracy as the people decided to leave in 2016 referendum? He says: "Democracy does not stand still..people have the rights to change their minds. We are calling for a people's vote. It is not a rerun of 2016 referendum because this vote is being asked by the people and not by the prime minister and the chancellor."

It has been two years since referendum but this episode of UK politics does not seem to be ending anytime soon. The debate around Brexit keeps coming to square one as the opinion is highly divided on the issue of future relationship with European Union. The leavers advocate to 'simply walkout' of the EU without striking a trade deal whereas the Remainers argue for a proper partnership with the 27 countries. Currently the bone of contention is about the nature of the deal with Europe. Prime Minster Theresa May has faced humiliating defeat in the parliament as her deal has been rejected by her own party members and the leader of opposition has not provided any clear alternative.