Report News
Select location to see news around that location.Select Location
Home > Sci-Tech > Environment > Stubble burning in Punjab: Is there a way ahead?

Stubble burning in Punjab: Is there a way ahead? 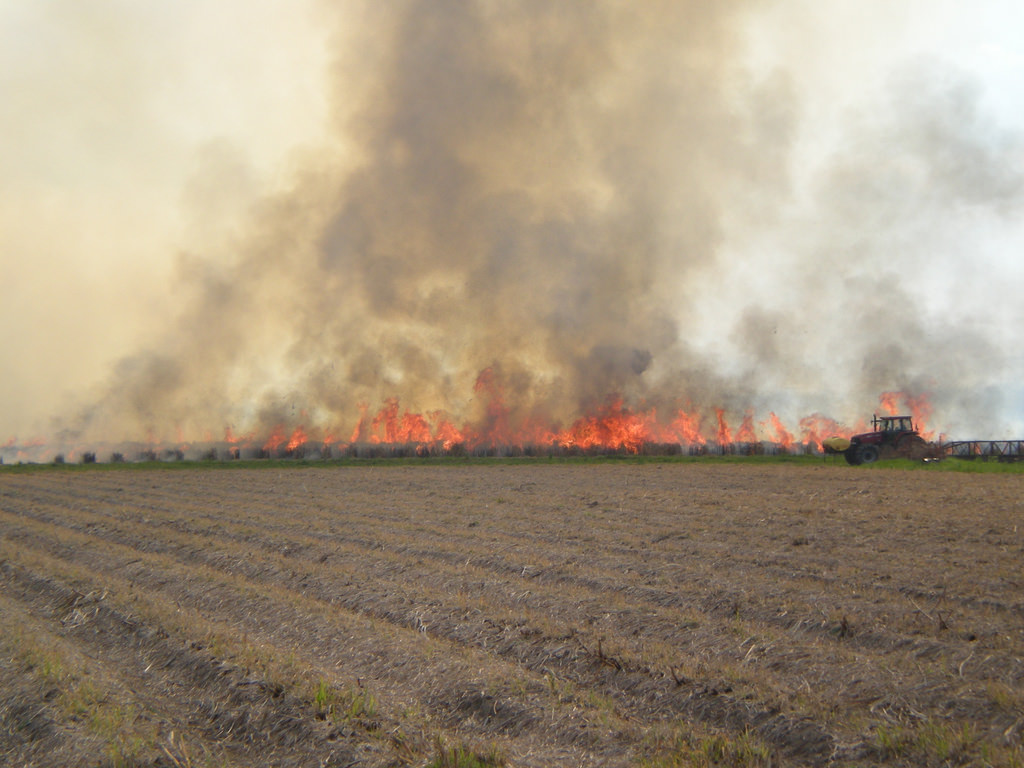 Every year, in the months of October and November, a cloud of smog covers Delhi and makes it completely hard for people to breathe. This is mainly due to the burning of farmland by the farmers in the nearby states of Punjab and Haryana. Farmers burn their land to make it ready for the next sowing season.

Stubble burning is the deliberate setting up of fire of the straw stubble that remains after wheat and other grains have been harvested.

These months witness a huge drop in the air quality of National capital region. According to the satellite data captured by the Punjab Remote Sensing Centre in the year 2017, it was found that there were 40, 510 fire incidents in Punjab alone, between September 27 and November 9, roughly coinciding with the kharif harvest season. Due to the crop residue burning, Delhi, finds itself under a canopy of toxic smog which also prompted Chief Minister, Arvind Kejriwal last year to address the closure of all primary schools and outdoor activities. The Particulate Matter (PM) level was high as 1,000- which is 16 times above the permissible level.

Why do farmers burn the crop?

The farmers of Punjab have consistently been using this process to get rid of the straw stubble. The burning leads to;

• Clear the field quickly and is cheap.

• Kills weeds, including those resistant to herbicide.

• Kills slugs and other pests.

Stubble burning is a new phenomenon. Historically, farmers harvested and ploughed fields manually by tilling plant debris back into the soil. When mechanized harvesting using combines became popular in the 1980s, burning became common because the machines leave stalks that are about one-foot tall. Burning the stalks is the quickest and cheapest way to clear them.

How does the burning affect the environment?

The fire releases several types of particles and gases into the atmosphere, including smog-forming carbon monoxide, and nitrogen dioxide. The burning has harmful effects on the environment:

• Damage to electronic equipment from floating threads of conducting waste.

• Risks of fires spreading out of control.

While the fire burns, smoke often blankets much of the Indo-Gangetic Plain, exposing millions of people in the densely populated plain to elevated levels of air pollution. The district-wise burning incidents of the previous year have revealed that Bathinda with 3,365 incidents comes second among 22 districts of Punjab, next only to Sangrur (6,596 incidents) and marginally above Patiala (3,702).

The Chief Minister of Punjab, Captain Amarinder Singh while discussing the issue to penalise the farmers after the National Green Tribunal fixed the environment penalties at Rs. 2,500 per incident remarked, "Penalising farmers would be 'more criminal' than the act for which they are being condemned." However, Singh has been ensuring that this year farmers and the people of Delhi do not suffer from the pollution emerging from Punjab.

In the year 2017, an amount of Rs. 650 crore is given to farmers to buy subsidised equipment such as Happy Seeder, Paddy Straw Chopper/Cutter, Mulcher, RMB Plough, Shrub Cutter, Zero Till Drill, Super Straw Management System on Combine Harvesters, Rotary Slasher and Rotavator.

Around 7,337 subsidised Agro-machines/farm equipment have been delivered. Of this, 2,819 machines/equipment were given to individual farmers, 2,144 to cooperative societies and 2,374 to Custom Hiring Centres across the State. In all 24,315 machines are expected to be delivered. While the small and marginal farmers are only able to sell about 1/4th of their crop, they are bound to burn the rest. It seems more concrete steps are required by the government to stop stubble burning.

Impact of the steps taken

According to the NASA images, a decline in the stubble burning as compared to last year has been noticed. The red dots in the images below suggest places where stubble burning may have taken place at any given time. The Central Government has acknowledged the large decline in the Stubble burning in North India. Union Environment and Science Minister, Dr. Harsh Vardhan said earlier this week that satellite and other data collected by central ministries show a decline in the instances of stubble burning in North India. "Punjab has recorded a 75 per cent reduction in stubble burning while Haryana has recorded a 40 per cent drop", Dr. Harsh Vardhan said while announcing the launch of a new warning system that will forewarn any dip in air quality over Delhi and NCR.