Is United Opposition a chimera or a possible reality? This is one enquiry in the political domain of India today. 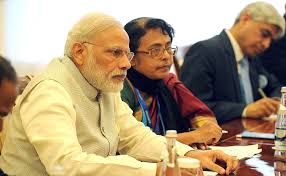 After the victory of the candidate of the 'United Opposition' in Kairana and Noorpur in UP, soon after similar ones in Phulpur and Gorakhpur, the failure of BJP to 'manage' a majority in Karnataka, unlike in Goa or Northeast has lead the opposition parties across to think of a combined anti-Modi-Shah force across India. The Gujarat scare for BJP before this, and the all regional parties supporting AAP on Delhi statehood and CM sit-in dharna followed by breakdown of the Jammu & Kashmir government, after the above, have further contributed to the Opposition unity.

But this entire coming together is based merely on anti-Modiism, and is just of leaders and parties as of now, and not of policies or a Common Minimum Program. Modi is a different category of a leader: with personal charisma for a substantial part of the electorate, drawing upon religious identity strengths and engaging a powerful online army to propagate his brand, his government has claimed successes, and has also vilified the opposition, now just in politics, but also in civil society. Hence, merely the template of an anti-Indira strategy of 1977 will not work today in 2018-19.

But sadly, all talks on alternatives are about parties to collaborate and the top leader/s. There is hardly a talk on alternative politics or policies on an alternative India vision. Today, India needs an alternative vision of governance, and not just huddling together of a few disparate parties or leaders of the Opposition.

Political Strategy 1: One to One Contest:

The only way to combat the Modi-Shah juggernaut and war-chest with huge resources is to have one-to-one contest. All Opposition combined together has to put up one candidate only. There will invariably be a lot of conflicts in determining which party puts up the United Opposition candidate where. The best and the simplest answer is to give every constituency to the winning party of the last Lok Sabha elections, and wherever an NDA candidate has won, let the runners-up party put up the United Opposition candidate.

This itself will make Congress put up candidates in nearly 45 winning seats and at least in 150 others where it was the main challenger. However, the remaining 250 seats must go to the regional parties whoever have won last time or were the runners up. Debating on who has ground-swell of support and who has gained or lost most in the intervening four years since 2014, will open up a Pandora box of bees with all getting stung. However, if all Vidhan Sabha and Lok Sabha constituency change hands, there can be some negotiations. But 200 for Congress and 350 for Opposition is a better strategy on the whole.

The better approach is to fight not in many but only in the best possible result seats and ensure maximum success. Quality of the contest must precede quantity of seats in a situation where all Opposition parties are extremely cash strapped in the post demonetization and post electoral bonds period. Hence, SP-BSP combined will take lead in UP with maximum 5-8 seats for Congress and RLD, RJD takes lead in Bihar with maximum 4-5 seats for Congress, TMC takes lead in West Bengal with maximum 6-7 seats for the Left and Congress together, AAP leads in Delhi, DMK leads in Tamil Nadu, with 6-7 seats for Congress and Kamal Hassan's Party together. However, Congress takes almost all seats of Gujarat, Rajasthan, Chattisgarh, Madhya Pradesh, etc except 2-3 for BSP.

Neither of the Opposition leaders, like Mamata Banerjee or Sharad Pawar, should have a touch-me-not approach towards Congress President Rahul Gandhi due to his young age and inexperience, nor should Congress be hell-bent on declaring Gandhi as PM candidate of the opposition if the regional parties by and large have issues with it. Best is to elect the most preferred leader of newly elected LS members as the PM designate as he will be the one responsible if United Opposition crosses the magic figure of 274 LS seats in the next general elections.

Congress stands to be the one gaining the larger number of seats won, and it is in sync with the spirit of the Constitution as well which calls for leader of the majority LS members to be appointed as the PM. This also deprives the BJP from Presidentialising the LS Polls and comparing Modi with the face on the other side which is its favourite and successful narrative in the last four years, except in Bihar and Delhi, and the Bihar man has been coopted while the Delhi man has been kept under tight leash.

The alternative force cannot just be of parties, but of an alternative world-view, of a common minimum program, and of an alternative approach to governance. First, pledge to protect the Indian Constitution and its basic tenets. So, commit to true secularism where the state does not negate any faith but also does not become party to any faith. Hindutva nor Muslim appeasement will not work. Pledge to uphold socialistic welfare economy as envisaged in the Constitution, because the marginalised people, with their per capita income are far below the subsistence level, cannot survive unless supported with minimum access to food, clothing, housing, public health and minimum assured education.

Pledge to protect democracy and hence leave media, entertainment, culture and education to be run not by bureaucrats but by professional experts. And, above all, pledge to protect legislatures by not short circuiting their sessions, and to protect the independence of judiciary by not interfering in their recruitment, postings, promotions and processes. Safeguarding democracy also needs to be through policy reforms, administrative reforms, judicial reforms, and electoral reforms, and through an all-out implementation of the institution of the Lokpal, apart from protecting the independence of the constitutional positions (e.g. EC, CIC, etc).

Political Strategy 4: Uphold rights of all communities without any appeasement

All communities need to be assured that India is theirs, but they need not be appeased too. The Sachhar Committee report shows the lack of socio-economic and educational development among the Muslim minorities and their representation in positions of power and responsibility. Situation is exacerbated today with a visible alienation of them from the political mainstream.

Also, if forest rights are not given to the tribal users of minor forest produce as per the forest dwellers' act on minor forest produce, and land rights are not given to the tillers, there cannot be visible change in the country-side and no end to Naxalism. Then, social assimilation will need distinct ways and means to empower women as well, particularly ensure their security in public places, raise conviction in cases of assault on women, and enhance their socio-economic participation.

Governance Strategy 1: Bring Forth an Alternative Economic Vision for India

United Opposition must promise a slew of economic measures, including viable Minimum Support Price and implementation of MS Swaminathan recommendations for agriculture, gradual recovery of all NPAs (specially in cases of willing defaulters), banking autonomy with SOPs on banking operations insulating them from political interference with RBI independence ensured, recovering black money in land, jewellery and foreign assets, and encourage investments in education and health with tax holidays and other benefits.

This plan also shall underline a fair share of funds between Centre and States, respect for economic federalism specially in the provisions of the Finance Commission, and execution of truly one nation one tax system through a uniform GST. Interestingly, it is important to increase investment in education and health upto 20% of the total national budget, which is around half today. Investment in health insurance and not on public health infrastructure does not good to the man on the ground.

Governance Strategy 2: Localise the campaign with a development plan for each LS Constituency:

There has to be a development plan for each LS constituency and this communicated very powerfully door to door and through local social media campaign. Instead of a lot of big picture talk of BJP leadership, in the form of bullet trains and acronymed development schemes or hyped up Ayushman Bharat and anti-Pakistan rhetoric, the Opposition must make 5 top actually needed development promises for each LS constituency. Localisation of this campaign along with the other strategies noted above will render Modi-centric presidential campaign of BJP a lot blunt and listless. Surely there has to be a national manifesto along with this constituency specific manifesto as well.

Modi stands tall in the battle of perception. It is 'There is No Alternative', a tall man of 56 inches chest against an army of political dwarfs, and the perception of no personal corruption of Modi as against motley group of corrupt forces. The image built assiduously by the new BJP narrative is about a united Hindu led India versus motley group of casteist and communal forces, etc. Falling into the same narrative, which the compromised media shall assiduously promote, will be suicidal for the opposition. The only way to combat it is to put forth an alternative qualitatively different narrative, and before the dominant BJP narrative takes further roots. Like, one tall arrogant dictator versus people's grassroots leaders. Like, selective chasing of corruption by Modi government while all corruption charges on BJP functionaries go un-investigated (like the alleged PDS and Rafael scams).

Like, one religion-high castes dominant narrative versus united India at the grassroots approach. Like, arrogant elite governance versus consensus striving for bottoms up governance. The alternative narrative has to be on these lines exposing the doublespeak of Modi-Shah dispensation. To prevent any low-scale or full-scale riots in the light of the expected Ram-janmabhoomi verdict of the Supreme Court, let United Opposition create Aman Committee of each Mohalla with civil society leaders of that locality and one representative of various opposition parties and conduct Peace Meets and rallies on a regular basis to isolate communal politicking by the right wing.

Focus less on the politics of minorityism and Dalitism, and more on the economics of Modi-Shah dispensation and how disastrous it has been with regards to demonetization, GST, joblessness, price of fuels, general price rise, fall in exports and imports, limited GDP growth, extreme agrarian distress, and the like. Atrocities on women can be another loud communication point, while those on Muslims, Christians and Dalits can be a more localized campaign at the grassroots not on top leaders' public talks or media interviews, even though communal polarization will be one major plank of BJP in the last leg of communication, as seen in Bihar elections as well. Well researched economic facts turned into easy to comprehend one liners, infographics and memes must flood the communication channels if opposition has to combat the onslaught of the well oiled cyber army of BJP.

Only a collective leadership of the United Opposition, named People's Federal Alliance (PFA), with a distinct Common Minimum Program and approach can make this United Opposition a reality on ground. Their over-arching vision has to take India to a more holistic sensitive people-centric development oriented future devoid of an overdose of rhetoric and aggressive emotions. A Lot needs to be done on this front to make it see the light of the day, and not merely a chimera.

(The Author is a noted media academician and columnist. He has been earlier the Dean of Symbiosis and Amity Universities. The views expressed are strictly his personal.)