Report News
Home > Editorial > The Voting Game: Mobilization is the name of the game

The Voting Game: Mobilization is the name of the game

Since voting in India largely takes place on the basis of collective loyalties such as caste, the trick is to get the endorsement of a numerically large caste or a group of smaller castes to win an election. 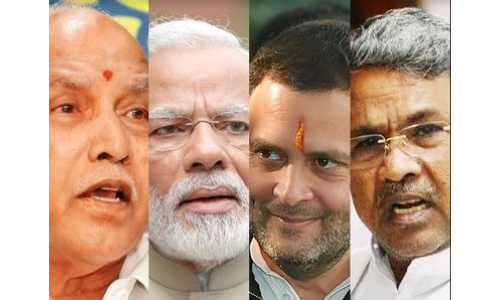 In a few days from now, Karnataka will go to the polls, electing Members to its State Assembly. There is feverish campaigning going on, accompanied by blaring loudspeakers and drumbeats. The three main contenders in the fray are the incumbent Congress, the BJP and the JD(S). The Congress is confident of winning, banking on its popularity from rolling out welfare schemes since it came to power in 2013. The BJP has left its star campaigner for the last, the PM himself descending on the state and currently holding a number of rallies. The JD(S) is also upbeat and is likely to emerge as a kingmaker. Its an exciting match with a fight to the finish!

The name of the game is 'horizontal mobilization' as the sociologists Lloyd and Susanne Rudolf called it. Since voting in India largely takes place on the basis of collective loyalties such as caste, the trick is to get the endorsement of a numerically large caste or a group of smaller castes to win an election.

The first few Chief Ministers of Karnataka belonged to what the sociologist MN Srinivas termed as the "dominant castes". They were peasant castes with large numbers and were not too low in the caste hierarchy. Devaraj Urs changed the game and brought in new possibilities. Belonging to a caste with miniscule numbers, he united all the low, backward castes and minorities into a formidable front and rode to power at the hustings.

After Urs, the Vokkaligas and Lingayats united to bring back the old order of rule by dominant castes. But the game had changed forever. The present CM Siddaramaiah revived the strategy of Devaraj Urs by uniting the lower castes under his acronym of AHINDA. Belonging to the numerically third largest community of Kuruba, after the Lingayat and Vokkaliga, he came to power under the Congress banner.

The BJP is not to be left behind. Its leader Yeddyurappa is the architect of Lingayat unity in the state. But the BJP is not resting on its Lingayat laurels which by the way, the Congress has sought to rent asunder by giving the Lingayats the status of a separate religion, thus differentiating them from the Veerashaivas. The BJP on its part is eager to cast off its image of an upper-caste party and reach out to the lower castes, especially the Dalits which constitute 17 percent of the population and are being assiduously wooed by all parties. With this in mind, PM Narendra Modi has, in a bid at dinner diplomacy, decreed that all its top-ranking elected representatives, including Ministers and MPs, eat a meal in a Dalit household and stay a night there!

This is, in essence, the game of "identity politics" that the Indian voter has been playing all along. The urban elite make disparaging remarks about it and exhort the voter to look at the merits of the individual candidate before voting for him. Little do they realize that the voting game is a game of one-upmanship which, if played successfully, can catapult the caste or group of castes towards upward mobility, while successfully dislodging castes which enjoy a superordinate place in government and business.

So it was with the non-Brahmin movement of the '50s in Tamil Nadu which dislodged the Brahmins from their exalted position in government occupations. This was built on by the Dravidian movements which have enabled entry of the lower castes in government jobs. More recently, Lallu Prasad Yadav in Bihar united the large Yadav caste into a formidable political entity. Nitish Kumar then went on to unite the even lower castes and give them a political voice. This democratic process of reaching down lower and lower into the body politic to bring up newer and newer castes into the upper socio-economic and political echelons is a stupendous achievement of Indian democracy. The so-called "identity politics" that we have been witness to all these decades has to be recognised as a serious effort by the lower sections of society to bridge the gap between them and the others, bringing in greater inclusion and equality in the body politic. The Indian voter is indeed adept at playing the game to his advantage.

(Lalita Chandrashekhar is a Senior Fellow at the Institute of Social Sciences, New Delhi)