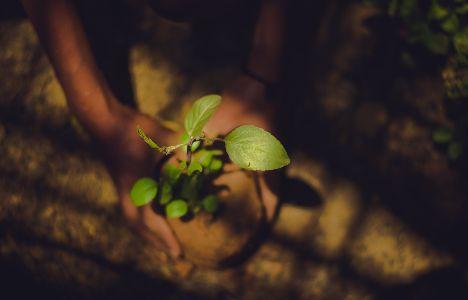 Amidst dismal and dark images of stubble burning in Punjab, creating health problems which are not only limited to Punjab periphery but even to the adjoining national capital, there emerges a ray of hope from a campaign in the form of Punjab government's 'Ghar Ghar Hariyali'.

Every year about 7 to 8 million metric tons of paddy residue is burnt in the fields by the farmers, releasing injurious toxic chemicals, which result in respiratory and other health problems.

As a punitive step to curb stubble burning, the National Green Tribunal (NGT) had directed to impose fine on farmers involved in stubble burning. The NGT had fixed a fine slab of Rs.2500 in two acre land and from Rs. 5000 to 15000 in the land measuring above 2 acres.

But now seeing the not so successful results of punitive measures, the Punjab Government has initiated a new positive campaign in the form of 'Ghar Ghar Hariyali' to combat the pollution effects. The purpose of the campaign is to provide clean and fresh air to the people of Punjab as well as contribute towards having a green and clean environment. This program will increase the green cover in the state. Under the campaign every citizen of the state would get three and every household 10-15 saplings of varied types free of cost and during 2018-19 the people would get 20-25 lakh saplings absolutely free with 4-5 lakh households being covered in current year.

"The Forest Department, Punjab, has planned a special campaign to plant maximum saplings and increase green cover in the state." Disclosing this here on Thursday, the Forest Minister, Mr. Sadhu Singh Dharamsot said that in pursuance to the 'Tandarust Punjab Mission' of the Chief Minister Captain Amarinder Singh, the Forest Department has chalked out a special campaign called 'Ghar Ghar Hariyali' which would see the distribution of free saplings throughout the state to increase forest cover.

Minister Dharamsot further added that during the special campaign under 'Mission Tandarust Punjab' various types of natural saplings having medicinal properties as well as fruit bearing capacity such as Sheesham, Neem, Arjun, Harad, Behra, Anwla and Jamun would be supplied to the people. The minister also exhorted the people to come forward to plant more and more saplings so as to ensure a clean, green and healthy environment for the present and future generations. He also solicited the cooperation of all to make this campaign a grand success and emphasized how haveing a healthy and robust lifestyle is the sole aim of 'Mission Tandarust Punjab.'