Is DHFL the next Kingfisher or Nirav Modi? Cobra post unearths details of alleged scam 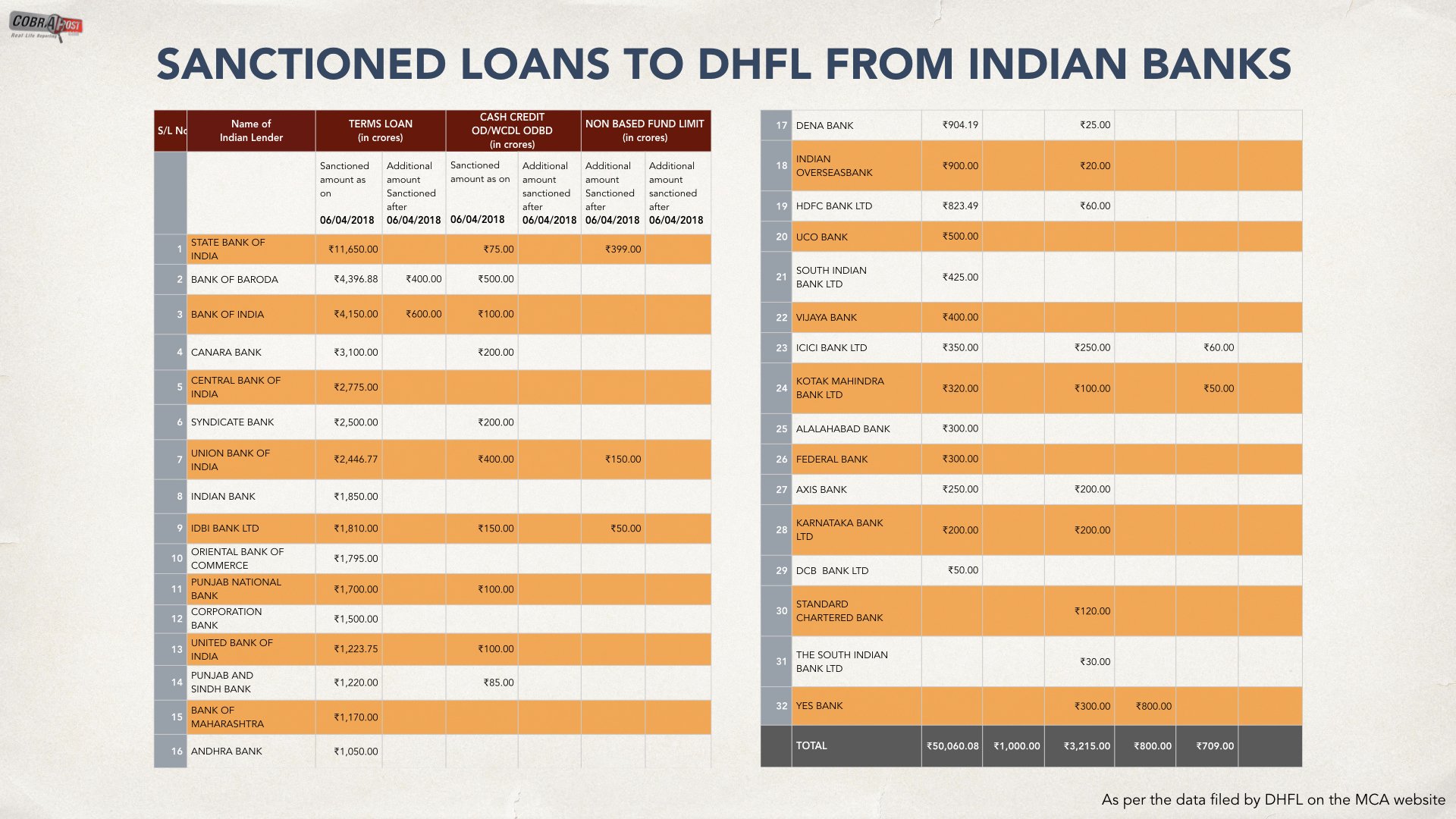 Cobra Post claims to have unearthed "the biggest banking scam in Indian history," accusing Dewan Housing Finance Corporation Limited and its primary promoters, the Wadhawan's of having siphoned off more than Rs. 31,000 crores of public money. The money has been claimed to have been lent to shell/pass through companies without due diligence. According to the news website, the recovery of this amount seems impossible as nor the company or the promoters own any of the assets themselves.

In a flooded press club teeming with reporters Cobra Post has accused primary promoters Kapil Wadhawan, Aruna Wadhwan and Dheeraj Wadhawan of having pulled off the scam. They claim that the money has been used to acquire shares and assets abroad, including in countries such as UK, Dubai, Sri Lanka and Mauritius. According to this expose, the biggest losers would be State Bank of India and Bank of Baroda, whose exposure amounts to Rs. 11,000 crore and Rs. 4,000 crore respectively. Foreign banks and shareholders from among the public would also be adversely affected. Already, the stock of DHFL has plunged by about 10% after the news broke to the public.

Anatomy of the alleged scam

Cobra post alleges that the key enabling factor behind these scams was the position of power and influence that Kapil Wadhawan and Dheeraj Wadhawan held in the Finance Committee of DHFL, that is responsible for overlooking approval of loans of above Rs. 200 crore and above to any entity.

Together, the DHFL and its primary promoters are accused of creating multiple shell entities, largely with a nominal capital of Rs. 1 lakh, divided into small groups of two-four companies, having similar addresses and the same set of initial directors, and on many occasions having the same group of auditors to mask the financial details. They are alleged to have disbursed a huge amount of loans to these shell companies, mostly without any security or collateral (as is the standard procedure) and to have used this money for creation of private assets both offshore (of about Rs. 4000 crores) and in India. One of these assets includes the Sri Lanka Premier League cricket team, Wyamba.

They are also accused of having ensured that these shell companies hid the name of DHFL as the lender, along with the terms of loans and conditions, as is mandatory by the law. On top of everything else, the expose also stated that the promoters are liable for insider trading amounting to approximately Rs. 1000 crore, and being in violation of the SEBI Takeover code.

Cobra Post has identified around 45 companies that they have alleged are used by Wadhawans as vehicles to siphon off funds from DHFL. Out of these, 34 shell companies are in the interest of Wadhawan and have been given unsecured loans of Rs. 10,493 crore and 11 belonging to Sahana Group, which have been given Rs. 3789 crore in loans. One of the directors of the Sahana companies is in judicial custody with regard to some alleged economic offence being investigated by the Economic Offences Wing. Most of the Sahana loans, according to Cobra Post, have now become NPA's (non performing assets).

Enormity of the Scam

Just to get a good gauge on the size of the scam, Cobra Post points out that DHFL's net worth is only around Rs. 8,795 crore. However, it's loans from banks and financial institutions is to the tune of Rs. 96,880 crore, that includes non convertible debentures, banks, external commercial borrowings, National Housing Board, public deposits and other sources. DHFL seems to have secured loans from at least 36 banks, including 32 nationalised and foreign and six foreign banks.

A political side to the story

The press release also states that DHFL has given loans to the ruling Bhartiya Janta Party (BJP), to the tune of about 19.5 crores between the financial years 2014-15 and 2016-17 and has advanced monies to several companies (run from the same address) in Gujarat and Karnataka around state elections. None of the several violations seem to have been noticed by the Reserve Bank of India, the Securities Exchange Board of India, the Union Ministry of Finance as well as the Income Tax Department.

One of the prominent shareholders of the Sahana Group, who is alleged to own some of the shell companies DHFL has siphoned money off to, is Shivram Gopal, former MLA from the Shiv Sena party. DHFL has also disbursed large sums amounting to a total of Rs 1,160 crore, to various Gujarat based companies under various schemes and projects. All of these municipal projects are on hold from the municipal corporations and most projects have been suspended. These sums have been disbursed very close to the time of Gujarat elections.

With the current problem of non-payment of loans and over exposure of public money, investor confidence in India has certainly taken a dip. If this remains uninvestigated or the amount recovery remains ring-fenced from the recently passed Insolvency and Bankruptcy Code or the SARFAESI act, it would not bode good news for the larger financial system in India.