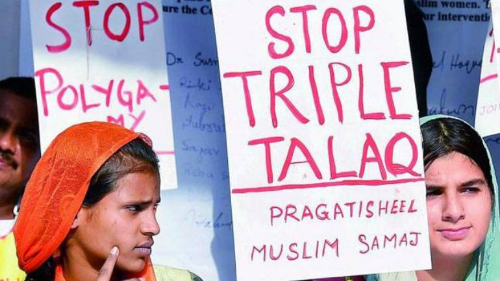 The Triple Talaq practice is as archaic as we know but even with the changing times and multiple appeals it has not benefited the aggrieved party, the women of the community. We attempt to sketch here a synopsis of the recent developments on the bill against Triple Talaq in its current manifestation.

Lok Sabha recently passed the Bill which criminalizes the practice of instant Triple Talaq , with the government rejecting the contention that it was aimed at targeting a particular community. The Bill was introduced in the Lok Sabha by the Minister of Law And Justice, Ravi Shankar Prasad on December 17, 2018.Terming the practice of divorce through triple talaq as "void", "illegal" and "unconstitutional", the bench ruled that triple talaq is against the basic tenets of the Quran.

What is Triple Talaq?
Triple talaq is a form of divorce that was practiced in India, whereby a Muslim man could legally divorce his wife by uttering "talaq' (the Arabic word for divorce) three times in oral, written, or more recently, electronic form.

The man did not need to cite any cause for the divorce and the wife need not have been present at the time of pronouncement. After a period of iddat, during which it was ascertained whether the wife is pregnant, the divorce became irrevocable. In the recommended practice, a waiting period was required before each pronouncement of talaq, during which reconciliation was attempted. However, it had become common to make all three pronouncements in one sitting. While the practice was frowned upon, it was not prohibited. A divorced woman could not remarry her divorced husband unless she first married another man, a practice called nikah halala. Until she remarried, she retained the custody of male toddlers and prepubescent female children. Beyond those restrictions, the children came under the guardianship of the father.

A man who pronounces talaq on his wife will be punished with a jail term and a fine. This bill also makes the pronouncement of talaq-e-biddat a non-bailable offence.Clause 4 of the bill states, "Whoever pronounces talaq referred to in section 3 upon his wife shall be punished with imprisonment for a term which may extend to three years and fine." Clause 7 of the bill states, "an offence punishable under this Act shall be cognizable and non-bailable within the meaning of the Code." (The Code of Criminal Procedure, 1973)

The current position of the matter is that the Lok Sabha passed the bill on 27 December 2018, with 245 members supporting it and 11 members voting against it. The bill, passed twice in the Lok sabha, could lapse if it doesn't get the approval of the Upper House by February, reports said.