Is the recent announcement of 10% reservation for the economically backward classes Modi government's last-ditch effort to resuscitate its existence? 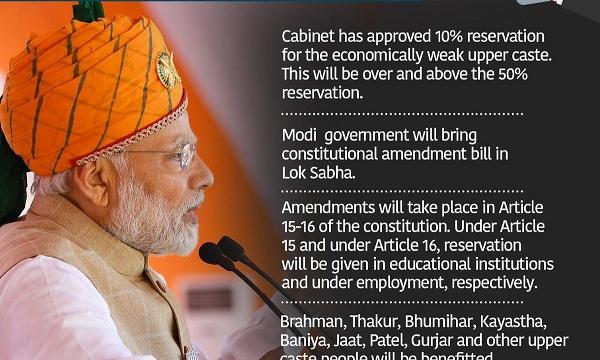 The reservation policy of India which was accepted by the Union Cabinet on January 7, 2019, proffers a 10% quota for the economically weak group (earning less than 8 lakhs annually). Families owning agricultural land above five acres, a house above 1000 square feet, or 100-yard plot or above in a notified municipal area or a plot of 200 yards or above in a non-notified municipal area cannot avail benefit under this policy.

There is one major differentiator unlike the earlier reservation policies. caste is not the criteria for this favorable treatment. There are speculations that this percentage will be over and above the existing reservation quota. Was this then for the appeasement of the general category that has been disappointed by the reservation provision but will they not feel further betrayed by this increment to the quota percentage.

In discussion with Praveen Priyadarshi, assistant professor of political science, Zakir Hussain college, Delhi University we explored the rationale behind this abrupt proclamation.

Further exclusion of the priveleged category
The eligibility criteria would probably envelope 90% of the general category and as such the feasibility is highly debatable. Not only does it further divide the general category but is highly politically motivated in absence of a premediated execution policy. It will undoubtedly be difficult to gain conviction as the majority of the general class is anti-reservationist. And the previously favoured section, the socially backward classes, SC-ST are not amused either placarding the 'merit argument' that they have been subjected to over the years. Social media is abuzz with quips on this latest firecracker and the opposition is having another field day. Capturing here some tweets on the topic:

"10% quota, if gets through, will reduce the scope for merit further. It will be more difficult for meritorious middle class youth to get into govt jobs.Need is to look into the whole question of reservation rationally instead of using it as a electoral gimmick to hoodwink voters."

This 10% quota is for general cast people who earn less than 8 lakh PA (66k PM). So almost all of middle class too is included! #Reservation #SavarnoKoSamman

Dear Modiji, quick question, if the father is rich but son is in economically weaker section, is the 10% reservation still applicable? #Reservation

Policy measure and political measure don't go hand in hand
In the absence of a captivating election narrative and being plagued with controversies like Rafale, GST, demonetization, 'Make In India' amidst others, the new quota bill is seen as the overplayed trump card but the nation is finding it hard to bite this bullet again.

Former Prime Minister, V P Singh, in 1990, changed the course of Indian politics with implementation of recommendations of the Mandal commission. Reservation has never known to generate employment but it has been seen as a desperate measure to secure a job. Whether it is Patels in Gujarat, Marathis in Maharashtra, or Jats in UP, reservation has been a counterproductive move. Reservation did not pay dividends then and it is highly unlikely to do so now.That is, if and when, the government counters the legal challenges to establish the validity of the constitutional amendment as Article 15 and 16 of the Indian constitution would need modification if this meets approval in all houses of parliament.

Jobs in the government sector have been shrinking and this issue might best be left alone till the government has a concrete plan on upscaling the supply. Neither Congress nor BJP or any other party will probably have much to reap from this failed proposal until employment regeneration models can be successfully realized as echoed in another tweet here.

Modi govt failed at giving jobs. If there are no jobs in the first place, what will any caste, any economic section get? 10% of Zero is still a Zero.